African agriculture should be positioned as the main driver of change on the continent. 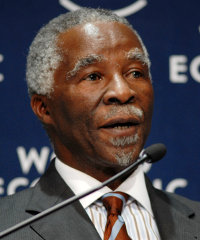 “As all the delegates know, the majority of the peoples of Africa earn their living from agricultural activity, principally in subsistence agriculture … Thus it is obvious that virtually all the principal challenges our continent faces are intimately related to African agriculture, and, accordingly can only be solved within the context of the positioning of agriculture as a central driver in the process of the renewal and development of African society,” said Mbeki.

In his speech, Mbeki cited from a 2000 World Bank book titled, Can Africa claim the 21st Century?: “Though Africa’s agriculture has responded to limited reforms, it remains backward and undercapitalised, the result of centuries of extractive policies. Recapitalising the sector will require maintaining and improving price incentives (including by encouraging competitive input markets), channelling more public spending and foreign aid to rural communities (including for local infrastructure), and tapping into the savings potential of farmers. These changes are also needed to create incentives to reverse severe environmental degradation. Public-private partnerships can make a contribution, including in agricultural research and extension, where a regional approach would also help. And wider access to OECD markets for agricultural products would make a big difference …”

Mbeki highlighted the importance of agri-processing in developing the agriculture sector. “I would like to emphasise this matter of value addition for the very obvious reason that to sustain the old colonial economic relations, in which Africa served as a producer and exporter of raw materials, including agricultural products, only serves to perpetuate our continent’s underdevelopment.”

The former president told delegates that Africa doesn’t need encouragement from the rest of the world to address its problems. “It is true that Africa continues to face many challenges, especially relating to issues of democracy, peace and stability. As Africans, and as I have said, we are firmly determined resolutely and urgently to address all these matters, especially through the structures of the African Union, in our own interest, without any arrogant prompting by our international partners.”

According to Mbeki, Africa’s economic growth since the 1990s was not accidental. “It was the outcome of purposeful actions by the governments and peoples of Africa to change their condition in a positive direction, relating to the issues of governance and peace, as well as the important matters of economic policy and practice.”

He said that the continent has “entered a new era to which all forward-looking investors should pay close attention”.