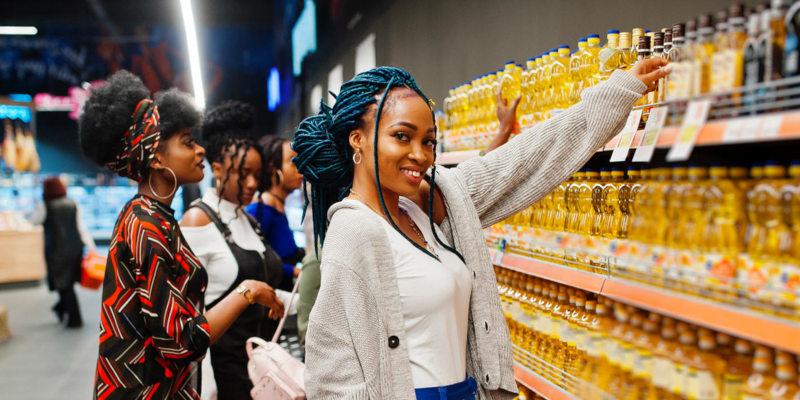 In the past decade, a stroll along the aisles of any African supermarket is revealing: there is a new wave of home-brewed brands that are fast becoming household names. Products like Dangote rice from Nigeria, Akabanga pepper oil from Rwanda and Tomoca coffee from Ethiopia attest to the gradual but persistent evolution towards greater agro-processing and value addition in the domestic agriculture sector.

Africa’s agribusiness sector is expected to reach $1 trillion by 2030, so there is certainly cause for optimism. Consumer demand for food in Africa is growing at an unprecedented rate. But what is fuelling this growth?

First, size matters. At a population of 1.2 billion people, Africa is currently the second most populous continent in the world, superseded only by Asia. According to United Nations projections, Africa’s population could reach 2 billion by 2030 and 2.5 billion by 2050. This means that one in five consumers globally will be African.

Second, quality counts. Sustained GDP growth rates in several countries across the continent have translated into rising incomes for some segments of the population. According to the African Development Bank’s (AfDB) African Economic Outlook Report, the middle-class population is expected is projected to reach 1.1 billion by 2060 which will make up 42% of the population. The average African middle-class consumer is becoming relatively more affluent, sophisticated and discerning in the food they choose to buy and eat. Concerns about price/quality trade-offs, convenience, nutritional content and food safety, amongst others, are central in their minds.

Third, concentration can be powerful. Although most growth poles are small to medium cities, megacities with populations of over 10 million inhabitants, such as Cairo, Lagos and Kinshasa, have gained increased prominence. These metropoles offer ripe opportunities for investment, as a result of the triad of high consumption, concentrated spending power, and agglomeration (i.e. lower and fixed distribution costs).

On the supply side, there is significant untapped potential. Over 60% of the world’s uncultivated arable land is in Africa.

Policy makers recognise the huge opportunities these trends present and are making concerted efforts to create and maintain an enabling business environment to attract both local and foreign investors.

Under its Feed Africa strategy, the AfDB is supporting its regional member countries to address both demand and supply side constraints along agricultural value chains. Through initiatives like the Technologies for African Agricultural Transformation (TAAT), the AfDB is boosting historically low yields in priority commodities such as rice, maize and soybeans. In Sudan for example, the TAAT-supported heat-resistant wheat variety has increased wheat self-sufficiency from 24% in 2016 to 45% in the 2018-2019 farming season.

At the same time, Special Agro-Processing Zones (SAPZs) are attracting both hard and soft infrastructure and creating value addition to increased agricultural produce. Together with partners, including Korea-Exim Bank and the European Investment Bank, the AfDB has invested $120 million in SAPZs in Guinea, Ethiopia and Togo, which will significantly expand local agro-processing activities along numerous agricultural value chains.

Along with these key investments in Africa’s agricultural value chains, the continent is starting to consolidate its wins. A case in point is regional integration, exemplified by the recent ratification of the African Continental Free Trade Area (AfCFTA), which has the potential to make Africa the largest free trade area in the world.

Agribusiness has already caught the eye of investors. Last year, it was one of the main attractions at the inaugural Africa Investment Forum conference. Agriculture was one of the nine sectors that attracted investor interest at the 2018 Africa Investment Forum. The sector held its own against big hitters like financial services, infrastructure, energy, and ICT. One such transaction was the Ghana Cocoa Board (COCOBOD) deal in which $600 million loan financing was mobilised from the African Development Bank and other investors to boost annual production of cocoa beans from 880,000 tonnes to 1.5 million tonnes. Within the next three years, the project is also expected to promote growth in the domestic cocoa value chain by increasing processing capacity two-fold from 220,000 tonnes to 450,000 tonnes per annum.

Africa’s expanding consumer base will undoubtedly lead to more spending on food and beverages on the continent. This should be enlightening for would-be investors in food processing and value addition ventures.

Mariam Yinusa and Edward Mabaya are Principal Economist and Manager, respectively, in the Agribusiness Development Division of the African Development Bank.