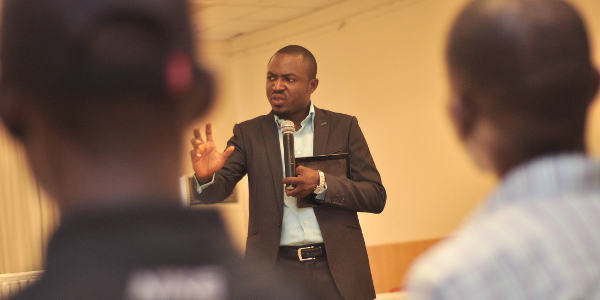 Aigbe Omoregie has had a passion for business since a young age. He was only 13 when he began selling eggs from his uncle’s poultry farm close to Benin City, the capital of Edo State in southern Nigeria.

He started out shifting about 10 crates of eggs a week to various outlets, but eventually grew that number up to 1,000, with seven people working for him. The business lasted all through his secondary school years.

“Before I got admission into Auchi Polytechnic (situated in Edo State), I told my parents I was just going to school to earn a degree because I wasn’t going to use it to search for jobs. I knew I was going to be an entrepreneur,” says Omoregie, who is now 36 years old and the managing director of Intercontinental Paint Limited, a Lagos-based paint manufacturing company.

During his first year in college, Omoregie sold used clothes, bags and shoes to students; the following year he added typewriters and desktop computers to his product range. From these ventures he was able to raise enough capital to buy a printing and photocopy machine, which he used to print and bind projects for final-year students.

On a visit back home to Benin City, one of Omoregie’s in-laws sought help selling his Mercedes-Benz vehicle. “He asked me to sell the car for 150,000 Nigerian naira. I paid him 120,000 naira upfront from my business capital, which was about 180,000 naira, and told him I will balance the remaining 30,000 naira. I used 20,000 naira to buy new tyres for the vehicle and took it to school. When I got to school, somebody fell in love with the vehicle and paid me 360,000 naira cash,” he recalls.

That was how Omoregie, who was still a student, entered the vehicle-sales industry in 2003, importing used cars into Nigeria. However, by the following year the business began to suffer as a result of a ban on second-hand vehicles. Customs officers sometimes seized his cars.

The challenges in the automotive industry prompted Omoregie to diversify into establishing an internet café on campus. He invested 7.5m naira into the venture, of which he borrowed 2m naira. But the business failed while he was in his final year at college.

“That was around 2005-2006. I lost that money and it was hell for me. I had 2m naira debt to pay and I couldn’t imagine going through such a situation in my life as at that moment. I was afraid I was going to be a [college] drop out,” he says.

Omoregie successfully completed his studies in 2006, but was angry with himself for losing the money.

“Using the internet was not that common,” he says, adding that the lack of power supply and high maintenance costs also contributed to the demise of the business. The bulk of the initial investment went into building the structure that housed the café.

“The major lesson I learnt from this experience was not of regret but of moving ahead – getting up from where I have fallen and moving on. I just told myself, ‘You need to do something different this time around and in a better way’. So I encouraged myself.”

Starting in the paint industry

After graduation, Omoregie travelled to Switzerland with the intention of remaining there to start afresh. “I didn’t even stay up to three months before I realised the environment wasn’t for me.”

Upon returning to Nigeria, Omoregie squatted with some friends in Lagos and spent about six months reading motivational and business books, while plotting his next move. With the wounds of the failed internet café venture still fresh, he was hesitant to just stumble into any business.

Eventually he received some divine direction. “The very first day I started a fasting and prayer programme, I got the inspiration to start a paint business. But I didn’t know anything about chemicals or how to make paints,” he recounts.

“That same day, I brought my fasting to an end. I had my bath and went into the streets to make enquiry about where I can learn how to make paint. The third day, I met a lady who told me about a freelance paint-making factory. She took me to the factory to meet a man who told me I can have my paint in the market, so long as I have the capital. He asked me how much do I have, and I told him 18,000 naira.”

Within one week, Omoregie had produced three drums of white paint, with his company’s name printed on the buckets. That marked the birth of Intercontinental Paint Limited in 2006.

The next challenge? Selling the paint. Something Omoregie had no idea how to do.

“I took the paint home and put it in my sitting room. I made sure it’s close to my TV so that whenever I am watching the TV, I am seeing the paint,” he explains. “Also during this period, I was calling different people that I knew, asking them to check if any of their contacts needed paint. A lot of people were laughing at me… But I didn’t listen to them.”

The stock spent six months in Omoregie’s sitting room without any prospective buyers. But then his fortunes changed when he received an order for close to 2m naira of paint.

“When I was given the quotation, I was sweating. My legs were shaking. At this time, the company was not even registered.”

Omoregie went back to the factory, and asked the man who helped him earlier to manufacture the paint he required. He closely studied the manufacturing process.

“We loaded the truck with 300 drums of paints and took it to Benin [City] overnight. Ever since, the company has not remained the same. It has been from one level of success and expansion to another. Yes, I started with low-quality paint, but today the only quality they compare our product with in the market is Dulux, which has been around for more than 100 years.”

Eventually, Omoregie officially registered Intercontinental Paints in 2010. The company’s own factory on the outskirts of Lagos produces about 20,000 litres of paint per day.

“We are miles away from where we started,” he says. “To date, we have not taken a loan from anybody or the bank. We have also been able to create job opportunities for a lot of people.”

In addition to the paint company, Omoregie also owns a construction business and is the founder of The Young CEO initiative, a platform he created to mentor young business people.

Omoregie says one of the greatest challenges he has faced in business is a lack of mentorship. “A lot of businessmen and women that were ahead of me, didn’t want to share their entrepreneurial story. They kept their secret to themselves and that has been one of the major problems in this country today. We don’t know how to pass knowledge across and mentor people.”

And while there are some unique challenges associated with doing business in Nigeria, Omoregie is not letting these get to him.

“Yes, there are difficulties… but I think the only difference between here and the Western world is that we don’t have reliable power and we have a weak currency. If the government can work on these issues, the economy will flourish.”

Throughout his entrepreneurial journey, Omoregie has gained insights that remain valuable to him going forward.

“One of the business lessons is that your word must be your bond – never promise what you are not going to do or what you don’t mean. I also learnt that integrity is all that you need to climb to the highest level in life. When your integrity is intact, people will commit their life and resources into your hands. Once you have built integrity, the money you are looking for will come.”

He encourages young entrepreneurs to pursue their dreams. “Fight until you are in charge of that which has been threatening you. Fight until you master that which you don’t know. Keep working, hard work pays. What you don’t know, don’t be ashamed to ask questions. Where you have not been, don’t be ashamed to ask people to take you there. Don’t think the day you start your business is the day you will start flying first class. It is a process. When you have put in your best, the best will come to you.”