Almost one-fifth of Africa’s 1bn strong population is estimated to be between the ages of 15 and 24. This age group is entering the working space where unemployment is high, and many are turning to entrepreneurship as a solution. 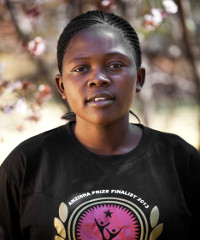 Every year the Anzisha Prize, Africa’s premier award for its youngest entrepreneurs, selects 12 of the continent’s top entrepreneurs between the ages of 15 and 22 to gain access to Anzisha’s community of mentors, business contacts, investors and other young business owners.

To find out what it takes to be young and successful, How we made it in Africa spoke to the top three award winners from last year’s Anzisha Prize.

When Best Ayiorwoth lost her parents at a young age, she had to cut short her high school education because her older siblings struggled to pay her tuition in the Nebbi District in northern Uganda.

Having always wanted to take her education further, this was a massive disappointment and inspired her to start an award-winning microcredit business at the age of 19, that would go on to help hundreds of women and young girls in Uganda.

Ayiorwoth realised that if she could empower mothers financially, they would support the education of their children, particularly young girls. “I have seen that when families can’t maintain all their children at school and have to make a choice, they would often choose a boy over a girl,” she told How we made it in Africa.

At 17 she moved to Kampala and joined S7 Project, a skills empowerment centre, where she started to form her business idea for Girls Power Micro-Lending Organisation (GIPOMO). Using her savings earned while working in a restaurant, Ayiorwoth returned to her home community in early 2011 and started giving monthly micro loans to women with small businesses, on the condition that they kept their children, especially young girls, in school.

GIPOMO has helped 64 women start their own businesses, 111 women expand their existing businesses and kept 168 girls in school by supporting their mothers. Last year Ayiorwoth won USh. 1m (US$400) at the FINA Africa Enterprise Business Challenge and first place and $25,000 at the Anzisha Prize.

Ayiorwoth credits much of GIPOMO’s success to the good mentor she had at S7 Project and advises other young entrepreneurs to look for mentors.

She also believes her success comes from using the challenges she has faced as inspiration to make a difference in both her life and the lives of others.

“[Aspiring entrepreneurs] have to actually do something that they feel strongly passionate about, and in most cases they should seek inspiration from their own experience… If you had a terrible experience, you should despise the experience to the extent that you are continuously seeking a solution for it,” she advises others.

Ugandan Titus Mawano is the entrepreneur behind Ffene, an award-winning business management platform for African small and medium enterprises (SMEs) that assists with accounting, customer and inventory management.

After studying computer science in the US for three years, Mawano decided to cut short his university education in 2012 and return to Uganda to pursue his passion of creating a business management tool that would assist SMEs. He told How we made it in Africa that one of the main challenges facing small businesses in his country is keeping adequate financial records.

In less than a year after launching his app, Mawano was awarded a $10,000 prize at the Apps4Africa 2012 challenge and last year won second place and $15,000 in the Anzisha Prize. Today close to 600 SMEs use Ffene’s software, which runs on both desktop and mobile devices.