South Africa could soon be home to one of the world’s tallest buildings, if the mayor of the City of Tshwane is to be believed. At 447 metres with 110 floors, the proposed building, set to be constructed in Centurion, will be Africa’s tallest structure and taller than New York’s Empire State Building.

The planned Centurion Symbio-City development will comprise two office buildings and one residential tower. The tallest tower will be 447 metres high, reaching 110 storeys. It will be flanked by two towers of 80 and 60 floors.

The City of Tshwane, the municipality under which Centurion falls, describes the project as a modern, technologically advanced, cutting edge development. 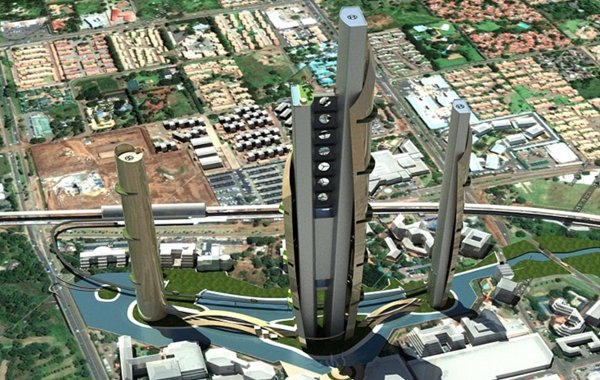 An artist's impression of the planned Centurion Symbio-City development.

So how will the proposed Symbio-City’s tallest tower compare to the world’s tallest buildings? Not taking into account buildings that are currently under construction, such as the One World Trade Centre building in New York, the Symbio-City tower will be the 14th tallest freestanding structure in the world, only 5 metres shorter than the Petronas Twin Towers in Kuala Lumpur, Malaysia.

Tshwane is home to 132 embassies and four universities. According to Kgosientso Ramokgopa, executive mayor of the City of Tshwane, “the development is a reflection of the range of economic opportunities, cultural experiences, safety and a quality physical environment that Tshwane offers.”

It is unclear when the proposed development will be completed.