Nigerian Aliko Dangote, Africa’s richest man and the founder and CEO of industrial conglomerate the Dangote Group, has been named one of Time magazine’s 100 Most Influential People in the world for 2014. 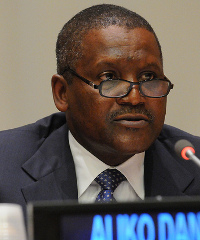 Aliko Dangote has been named one of Time’s 100 Most Influential People.

With a net worth estimated at over US$24bn (according to Forbes), Dangote made his billions with operations and investments in a range of industries across the continent, from cement to sugar. But he is not credited for making Time’s prestigious list for being rich.

His profile for Time, written by Bill Gates, described some of the efforts Dangote has made to eradicate viruses such as polio and other diseases.

“Aliko is Africa’s richest man, and his business activities drive economic growth across the continent. That’s impressive, but I know him best as a leader constantly in search of ways to bridge the gap between private business and public health. It’s for that reason he helped create the Nigeria Private Sector Health Alliance. And it’s for that reason he is an advocate for agricultural research and malaria control,” wrote Gates.

Other Africans to make the 2014 list of Most Influential People include Nigeria’s Finance Minister and Coordinating Minister for the Economy Ngozi Okonjo-Iweala; South Africa’s Public Protector Thuli Madonsela; Uganda’s Sister Rosemary Nyirumbe and Kenyan author Binyavanga Wainaina, among others.

No time off for Dangote

In a 2012 speech at the Lagos Business School, Dangote shared how he manages his time – a scarce resource –  juggling business and other commitments. He told aspiring entrepreneurs in the audience that he starts each day at 5am, gets about 4-5 hours’ sleep a night, and has not taken a vacation in 14 years.

In addition, he explained how he receives numerous invites to weddings, conferences and other functions on a daily basis and tries to make at least a 20 minute appearance at each event, when possible. And the same goes for travelling. When attending business meetings or conferences in other countries, Dangote said he can’t afford to waste time.

“Sometimes I go all the way from [Nigeria] to China, and spend only five hours in China and come back,” Dangote said. “That’s why I don’t take my private jet to China because the pilots need hours to rest, and the hours that they need – which is nine hours to rest – I don’t have… So I have to take Emirates.”

Monica Musonda, who worked with Dangote for years as director of legal and corporate affairs at the Dangote Group, told How we made it in Africa that she learnt a lot from Africa’s richest man before moving back home to Zambia to set up Java Foods.

“Working with a visionary is always hard work. He never stopped working, which meant we never stopped working. On the flip side, he emphasised the importance of maintaining humility and focus, being driven and working hard and not being afraid to take calculated risks. His motto is ‘nothing is impossible’. And he was right.”