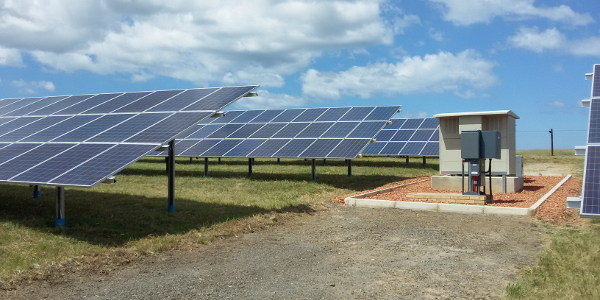 The solar farm at George Airport.

The South African city of George has just become home to the first solar-powered airport in Africa, with the recent installation of 3,000 photovoltaic (PV) panels spearheaded by Airports Company South Africa (ACSA). The roughly US$1m solar farm, which first kicked off in March 2015 and has a capacity of 750 kW, is set to supply 41% of the airport’s energy demand for the next 25 to 30 years.

With South Africa’s soon-to-be implemented carbon taxes, businesses in the country are increasingly looking into green energy, and ACSA is no different.

The group executive for airports at ACSA, Andre Vermeulen, stated at the opening ceremony they wish to have all six of their regional airports running on solar in the next 18 months, an investment that will cost in the neighbourhood of $570,000. The construction of solar farms at the airports in Kimberley and Upington are already underway.

Vermeulen believes, with a 15-year view, there could be a price parity between purchasing grid power from national power utility Eskom and solar electricity generated on site. The solar farm is able to generate 250,000 kWh of green energy per month and costs roughly an annual $13,000 to maintain. Any excess energy the airport does not consume will be sold back into the national grid.

Besides the benefit of lower carbon emissions, according to Vermeulen, this project was able to train and create work for 16 people, and he hopes that future solar-related jobs will help reduce South Africa’s unemployment rate.

“I think we have equipped these individuals with necessary skills so in future they can even attempt their own installations. They will be able to install PV installations, but also maintain them. I think in total in the country, if you look at renewable energy in the last two years, we have almost installed systems to the value of 6 GW. So all these systems will need to be maintained and hopefully this is another source of employment into the future for all of us.”

The opening ceremony was attended by the transport minister of South Africa, Dipuo Peters. In her speech, she commended ACSA on the plant and its performance within its first month of operation. She added that the plant is expected to save an excess of 1.2 million litres of water a year.

Peters believes that despite South Africa’s low global emission footprint, its potential in renewable energy generation places it in a position of responsibility with regards to combating climate change.

“Collectively, Africa contributes very little to the dangerously high global greenhouse gas emissions, but our benign culpability does not suggest that we do not have a very significant role to play when it comes to climate change.” 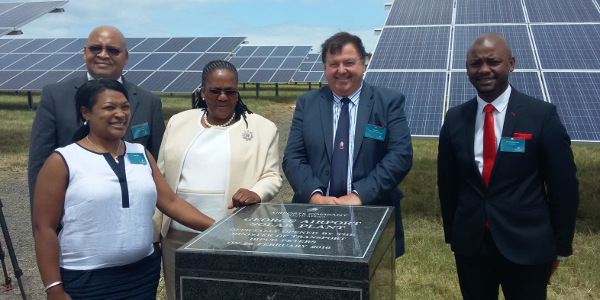 Brenda Vorster, the George airport manager, told How we made it in Africa, “I think environmentally we are giving our bit back, and making an impact ensuring that we leave a legacy for the children’s children going forward, and not just for the airport company, but for the whole community – the greater George itself.

“So for George airport, as a forefront runner on this, we are very excited that we can challenge other companies to start embarking on going green. Obviously we are a business and going forward we would like this to be an investment – but that is not our initial goal. Our goal is to go green.”

As for ACSA’s long-term plan, Skhumbuzo Macozoma – chairman of the ACSA board – said their goal is to achieve a zero-carbon footprint at all of its airports, thereby earning a Green Building Council of South Africa 6-star rating. To minimalise their environmental impact, according to Macozoma, they need to address a number of key issues, including energy consumption, water use, and the minimising of waste.