While oil and gas activity in West Africa is nothing new, it is the activity in East Africa which is creating a stir amongst exploration companies and of course, their suppliers. 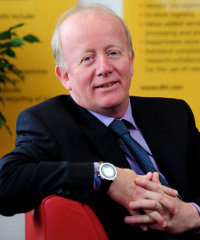 This is according to Steve Harley, DHL’s energy sector president, who says that while Angola and Nigeria have always been the most notable producers within the sub-Saharan region, more recently, significant gas discoveries in Tanzania and Mozambique, has led to East Africa now receiving its share of attention from global oil companies and potential investors.

“Oil discoveries in Uganda and Kenya have also added to the excitement in the sector as new players look to enter these markets, including some of the largest independent and international oil companies, otherwise known as the super majors, who are now also witnessing the potential in this region.”

He says that in addition to the developments in East Africa, both Namibia and South Africa are also on the radar of investors within the sector. “South Africa in particular is receiving much attention, mostly because of the potential of shale gas in the Karoo, but also because it has a long and largely unexplored coastline, off which many believe large hydrocarbon fields may exist. As a result of the region’s potential, there are several offshore drilling exploration expeditions currently being planned in South Africa by the major oil companies.”

“While exploration activity in Africa is at its highest level ever, the continent remains largely unexplored”, says Harley. PwC’s Africa Oil & Gas review titled From promise to performance released in June 2013, revealed that Africa currently supplies approximately 12% of the world’s oil and boasts untapped reserves estimated at 8% of the world’s proven reserves.

“With the ever-increasing need for energy in Asia and in particular China, many of these countries are positioning themselves strategically in Africa as they seek to tap into new resources to support their growing energy needs.”

“Despite the significant developments in the renewable energy sector, the world’s dependency on hydrocarbon-fuelled energy resources will continue for many years to come. According to the BP Energy Outlook 2035 report, global energy consumption is expected to rise by 41% from 2012 to 2035, and that 95% of that growth in demand is expected to come from the emerging economies.”

“Across the globe, existing and previously significant oil reserves are being depleted and so the need and desire to explore new geographies and develop new technologies to reach and extract difficult oil and gas reserves becomes ever more apparent. These new technologies are being developed at a rapid rate, which is allowing previously challenging operations and inaccessible deposits to be economically extracted and produced.”

He adds that DHL is also beginning to witness many exploration companies, as well as the oilfield service companies, outsource non-core functions within their own supply chains. “This is creating opportunities for small and medium enterprises to provide products and services required to support oil and gas operations locally. The knock-on effect can therefore be game-changing for any single country or region in terms of economic development. The importance of this outsourcing and localisation trend therefore cannot be underestimated,” says Harley.

The company is also witnessing stronger relationships and increased levels of collaboration between African countries as they seek to share risk and jointly benefit from a united approach and vision. This is particularly evident in East Africa in countries such as Kenya, Uganda, Tanzania and South Sudan. A recent example of collaboration in Mozambique is the expansion of oil and gas company Sonangol, from Angola.

“At DHL, we work closely with our customers to optimise their complex supply chains and manage logistics costs better, so that companies can focus on their core activities. And, our team applies the same exacting HSSE and compliance standards as the industry itself. We have been operating in Africa since 1978 and our unrivalled footprint is only rivaled by the size of our air network – we are the only logistics company to operate our own aircraft in Africa which currently consists of 14 dedicated aircraft, servicing all corners of the continent. When it comes to the oil and gas sector, it rings true, that nobody knows Africa like we do,” concludes Harley.