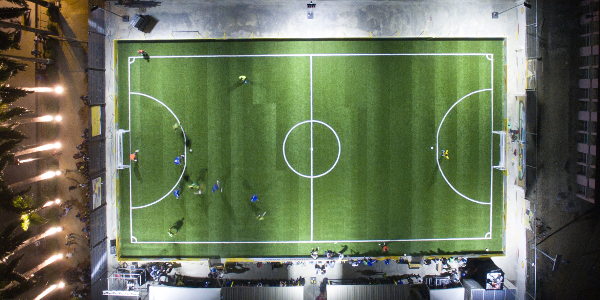 Fans of the Aigle football club of Menoua, a team in Cameroon’s second division, cheer their players during a training session. Among the strikers is 31-year-old Emmanuel Koska.

Koska recently returned from Thailand. He sold his father’s land to pay for the trip but says that once he arrived, his agent disappeared and the team he went to play for did not retain him.

Now back home, Koska struggles to earn enough to meet his needs and those of his family.

“Playing at the local level here in Cameroon, there is nothing much,” Koska says. “Normally on Monday, after a day of play, players can earn like 750 [Central African] francs (about US$1) per training session and it is not every day.”

He says overseas teams consider the players they know first, while many of the Cameroonian players wind up working as night-watch men or doing odd jobs for little pay.

When they return home, their performance on the field has suffered and coaches lose interest.

Many African youngsters dream of becoming wealthy football stars but stories like Koska’s, as well as the first-ever Global Employment Report by FIFpro, the world players’ union, could serve as a reality check.

The report highlights precarious working conditions and contract violations such as delayed pay that can leave players vulnerable to injury and match-fixing.

Salaries are also lower than the public may think, according to FIFpro, which finds that nearly three-fourths of players in Africa earn less than $1,000 per month.

Joseph Embola, a 24-year-old player for Tonnerre Kalara, a division one club, says he tries not to think about the money aspect of the game.

“When we are playing football, we are not thinking about the money,” Embola says. “We are thinking more about the future because if we think about money, it is going to discourage us. Can you imagine that we go for nine months without being paid? They owe us arrears for nine months. That is very discouraging.”

Just a handful of Cameroon’s 100 professional teams actually pay their players, according to first division coach Kazimir Makeh. The rest have to rely on their families and handouts from fans.

Makeh says the consequence is that Cameroonian football is being deprived of youths who could make the game more interesting, competitive and lively.

Once a young man shows signs of becoming a good player, Makeh says the talented player is recruited abroad with promises that his needs, and the needs of his family, will be met. He says players prefer to go on the adventure.

In a bid to retain more talent, the Cameroon Football Association is looking for company sponsorship so that it can add to the five million CFA francs, about $9,000, that it gives to clubs each year. – VOA