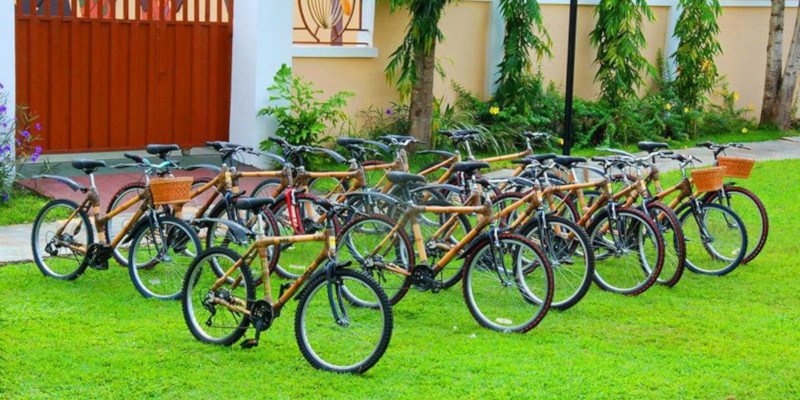 Ghana Bamboo Bikes Initiative produces and sells handmade bicycles for between $150 and $300 a piece.

The youth are the driving force for action on climate and the environment. That was the message hammered home to delegates at Africa Climate Week in March 2019, the first of three annual regional climate events ahead of the United Nations Secretary-General’s Climate Action Summit to be held in September this year.

Africa Climate Week was held in Accra, Ghana, and organised by the government of Ghana and partner organisations, including the Nairobi Framework Partnership, which supports developing countries in preparing and implementing their plans to address climate change.

Many of these young Africans, who participated in the Africa Climate Week, have been launching start-ups that address climate change, protect the environment and provide jobs.

He had been helping a friend to turn around his shoemaking business before he delved into eco-fashion, manufacturing shoes from used materials.

“I am a banker by profession, but now I’m a shoemaker. I use recycled materials to make shoes,” Peter Kweku Anowie told Africa Renewal.

For him the transition from banking to entrepreneurship happened by chance. He said, “I am from Takoradi, in western Ghana. One day I chanced upon a shoemaker friend whose business was collapsing. I told him I could assist by investing some small capital in his business, so that he can continue to operate.”

Later, realising shoemaking could be profitable, Anowie decided to go all in. “I saw that it was a cool and creative business, and I just resigned from my banking job to get involved in the shoemaking business fulltime. I am a business administration student and I majored in banking finance, so I have some knowledge of business.”

Anowie also wanted to establish something that could train the youth and “show them how to be financially independent, how to get something going so that they can improve their living standards”.

Three years in, the business currently employs about a dozen people. “I am very happy because I see that other people around are being trained in the shoemaking business. They are not just earning money for themselves, they are also able to take care of their friends and extended family.”

As with other eco-start-ups in Ghana, the people involved in KolikoWear aim to scale up to have more of an impact on society. The Ghana Climate Change Innovation Centre (GCCIC) is providing support, training and other technical assistance.

“I just signed on to GCCIC last year, and yes, they’ve been supportive, making sure that all my books are up to date to attract investors,” said Anowie.

Bamboo bikes made in Ghana are a global hit

“How best can we utilise our own local raw material such as bamboo to create employment as an inclusive business model—a business that can tackle environmental issues, social and economic issues?” That was the question on the mind of Bernice Dapaah when she founded the Ghana Bamboo Bikes Initiative (GBBI) a decade ago.

Located in Kumasi in southern Ghana, GBBI employs about 50 workers, mostly women. It produces and sells handmade bicycles for between $150 and $300 a piece.

“We have different types of bikes. We have the bikes suitable for men and those suitable for women. We also have mountain, road and city bikes, as well as cargo bikes that farmers use to carry goods,” Dapaah told Africa Renewal.

“Currently, the bikes are about 75% to 80% bamboo. The body is made of bamboo, but wheels and engine are the regular ones like in other bikes,” Dapaah explained. For her, the bamboo initiative is more than a business; it is also about women’s empowerment.

Overall, Dapaah is glad that the business is not “just an environmental symbol. We are also cultivating bamboo to feed the industry. We are also creating a space for the carbon balance. That is what we are doing. We hope to do more in the future.”

“One of the things our people are not always aware of is that it takes hundreds of years for plastics to decompose in the soil. And it takes a long while before its effects are felt, and by then, the harm is so bad that it can’t be controlled—because the emissions will be very high,” Wisdom Kafui Honu told Africa Renewal.

Honu, who is the cofounder of Coliba Ventures, a plastic waste-collection venture based in Accra, Ghana, was talking about how he became an environmental entrepreneur. It all began with a personal tragedy when one of his friends drowned in a flash flood. At the root of the tragedy was plastic-clogged drainage.

“It was in June 2015. My friend was waiting for me and I was late to the rendezvous. It started raining and the junction he was standing at quickly flooded, turning into a deadly torrent, destroying properties, sweeping cars away and drowning passersby in the process,” he said.

More than 50 people were killed that day.

“The rain was torrential,” Honu remembered. “But the drainage system was clogged by plastic waste.”

Devasted by the loss of his friend, Honu said he asked himself, “Instead of just mourning, why not do something about the situation? Why not solve the problem now, why not recycle the plastics that take so much time to decay?”

He went on to cofound Coliba Ventures, a company he described as “a complete plastic recovery and collection service.” It also educates people used to lumping plastics and other wastes together on how to separate them.

“It has been one of the toughest initiatives ever because this is a behavioural pattern that people have lived with for so many years and it is very hard to ask people to change their minds and ways,” he said.

The company offers rewards of vouchers for fuel or for mobile internet credit to households that are willing to be part of the recycling movement. Honu said they tell people, “Give us your plastic waste and we give you a voucher to fuel your car.”

Honu added that “people who earn less than $5 a day give us their plastic waste and we give them money or data. The only thing you have to do is to make sure you present your plastic waste to us or you make sure we pick it up from you. Then you decide which rewards you want.”

The company then deliver the collected plastics to recycling companies.

According to Ghana’s Environmental Protection Agency, about 2.58 million metric tonnes of raw plastics are imported annually, of which 73% ends up as waste, while 19% is reused. Yet less than 0.1% of the waste is recycled.

Recognising that only a tiny fraction of plastic waste is being recycled, Honu said: “We have to start changing the trend somehow.” It may take a long time, but he continues to be motivated by his desire to make sure his friend did not die in vain.