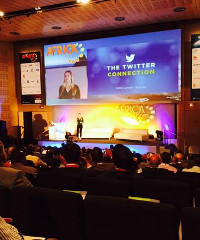 Partnership was on everyone’s lips at this year’s AfricaCom event.

AfricaCom 2014 – where everyone is friends

Every year, the great and the good from Africa’s ICT industry get together to discuss the past, present and future at AfricaCom in Cape Town.

This year, the event was the friendliest it’s ever been. Partnership was on everyone’s lips. Mobile network operators – from Millicom to Airtel to Cell C – want to co-operate with platforms such as Facebook, Twitter and WhatsApp. Payment solutions providers, like Skrill, are partnering with network operators and companies such as Microsoft. Mobile money providers and banks, traditionally thought to be rivals, now apparently want to work together, while device manufacturers and networks are also collaborating to produce cheaper phones. Everyone is friends.

To be honest, it makes sense. While large swathes of Africa remain unable to access the web, it makes sense for all players to work together in getting people online. Right now, customer acquisition is what it’s about, whether you’re Vodacom or Facebook. Will this co-operation actually occur on the level AfricaCom participants said it would? Probably not. Years of mistrust do not die overnight. And even if everyone does join hands in the interests of customer acquisition, expect the gloves to come off again when everyone is online and revenues become the primary battleground.

LTE stepping to the fore

Having arrived later to the world of communications, Africa has a history of leapfrogging certain technologies. Increasingly, Africans are moving directly from “dumb” phones to smartphones. The same is happening with networks, with many companies and countries going straight from 2G to the much faster 4G.

4G LTE network operator Smile has announced plans to roll out services to 15 cities across Nigeria by the end of next year. The company is already live in Ibadan, Lagos, Abuja and Port Harcourt.

Rwanda has gone a slightly different route, with the government playing a more important role than elsewhere. 4G services went live on Tuesday in Kigali, with Minister for Youth and ICT Jean Philbert Nsengimana saying it would speed up Rwanda’s national development goals.

Operators at AfricaCom were clear on the benefits of LTE, with the extra bandwidth projected to lead to better services. Everyone is also unanimous on the need for prices to come down. Undeniably LTE is coming to Africa at an increasing pace, and all that remains to be seen is how operators, regulators and governments can work together to make sure it is affordable.

South African start-ups are making their presence felt outside of their home country. Point of sale (PoS) and airtime distribution start-up Nomanini has partnered ICT provider Paratus Telecom to launch a service in Namibia, making it the tenth country in which Nomanini has formed a partnership.

Vendors are provided with a terminal – a “business in a box” – from which they can sell prepaid airtime vouchers. The cloud-based platform means vendors can simply “upload” airtime when they have internet access, though reselling does not require any connectivity or even electricity. A voucher is printed within seconds, while the device’s battery lasts for five days.

Another South African innovation heading abroad is Thumbzup’s Payment Pebble, a mobile PoS device. The mobile card reader can be connected to an Android or iOS device, and allows merchants to accept card payments using their smartphone or tablet. Already live in South Africa with ABSA bank, the Payment Pebble has now been launched in Australia with the Australia and New Zealand Banking Group (ANZ).

These expansions are interesting for two reasons. Firstly, South African start-ups that truly want to scale must look outside the limited size of the country’s market. Though these two companies have taken different routes – Nomanini to greater Africa, Thumbzup to Australia – it is clear that ambitious start-ups must take on international characteristics in order to succeed.

Secondly, it is further evidence of the great growth potential of payments start-ups. Campaigns are in swing across Africa to promote a move away from cash, but issues of trust and security remain. Solutions that can counter these problems can go very big, very quickly.