Nearly 40 countries in Africa have either discovered or are currently exploiting oil and gas resources. While many view resource discoveries as a catalyst for growth, there are also concerns that some countries could become complacent. 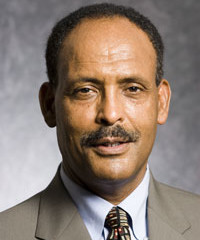 Professor Lemma Senbet, executive director of African Economic Research Consortium (AERC), says the continent should diversify and not focus exclusively on resources. Senbet criticised the approach of focusing on a single commodity, arguing that there is need for “economic diversity” in Africa.

“The emphasis should be on economic diversity because what you don’t want is to focus only on minerals and not do anything else. With external shocks, you [could] become very vulnerable,” says Senbet. “I think economic diversity is one of the areas that Africa has been weak [on] for a long time. We tend to grow fragile, single commodity [driven economies which] is non-inclusive. We should diversify.”

The AERC is an Africa focused economic policy research institution based in Nairobi, Kenya. Established 25 years ago, AERC has supported more than 800 thematic research projects involving over 3,300 researchers from more than 41 countries. Over 1,200 senior African policy makers are in AERC’s high-level policy network.

Senbet told How we made it in Africa that countries making new discoveries should approach mineral resources cautiously to avoid the “syndrome of natural resource curse which many African countries have been victims of”.

“[We need] to have mechanisms for shared prosperity not only for this generation but also for future generations. But I don’t think that doing that is going to prevent you from engaging in other sectors.”

Senbet is a professor of finance and the director of the Center for Financial Policy at the Smith School of Business, University of Maryland, US. According to Senbet, Africa should focus on mechanisms to achieve inclusive growth which remain elusive despite improving conditions on the continent.

“At the aggregate level, ‘Africa Rising’ is a real story. I would even venture to stay that this is in the same proportion of the Asian Tigers (in the 1980s). The discrepancy is the extent to which this is trickling down,” he says. “One way to solve this is by enhancing financial inclusion in the disadvantaged segments of Africa’s population. In general, when we grow, we should also be concerned about the equality of growth and the pattern of growth.”

Growth should include the private sector

While lauding African governments for increased democratisation and governance, Senbet adds that promoting the existence of a robust private sector by improving the business environment is also essential.

“We should have in a grander scale a policy space for promotion of the private sector,” Senbet says. “If you are coming up with industrial policy, it should not be heavy-handed government policy. It should be in partnership with the private sector.”

According to Senbet, “China’s engagement with Africa in infrastructure development and project financing has been useful” and has had a positive effect on the continent’s development. However, there are major concerns.

“I get worried about the fact that they don’t really incorporate quality of governance in their decision making which actually could have a negative impact on [the] democratisation movement in Africa,” says Senbet, adding that poor working conditions in Chinese companies in Africa are also a concern.

Senbet argues that Africa stands to benefit from the “indirect impact of hostile rivalry” between China and the West.

“The US all of a sudden woke up, and China has taken over Africa and all of a sudden they started getting more engaged. Then we have BRICS (Brazil, Russia, India, China and South Africa); there is some spillover rivalry. Africa should actually judiciously exploit this.”

Senbet cites Ghana, Mozambique and Botswana as some of the countries that “stand out” for him in terms of economic growth.

“I am willing to include Ethiopia but I have questions about the sustainability. It’s not just Ethiopia… I have noticed many other countries where there is heavy usage of foreign assistance. I often worry about the extent to which growth that is highly influenced by foreign assistance is sustainable.”