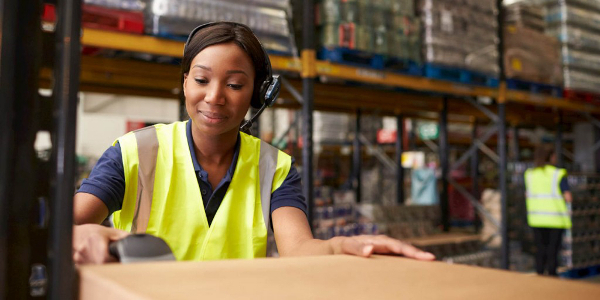 Marvel’s “Black Panther” film about an African prince with superpowers blindsided the movie industry in 2018 with its amazing run of success, proving the hitherto underappreciated appeal of the Africa brand. Now it appears the world of e-commerce could be similarly shaken up by Africa.

The old narrative of Africa on the margins, disconnected from the global economy, riven by conflict or corruption and heavily dependent on foreign intervention and donations, is fading fast. The internet is playing a big part in facilitating this change, hence the increasing relevance of e-commerce on this still much misunderstood continent.

Africa’s population is growing rapidly, especially its middle class, which is expected to make up 1.1 billion out of 2.5 billion Africans by 2050. And that mushrooming demographic, comprising professionals and business people with increasing disposable income, has a taste for Western goods: an obvious opportunity for e-commerce. McKinsey Global Institute projects e-commerce could be worth $75bn in Africa’s leading economies by 2025.

“At the moment, 90% of US and UK retailers don’t sell in Africa – so many brands have simply nixed Africa,” says Chris Folayan, CEO of MallforAfrica, an e-commerce platform that allows customers in 17 African countries to purchase directly from major international retailers that would otherwise be inaccessible.

“They have these amazing websites but can’t be accessed by African countries; these businesses have dismissed the continent for reasons I have no clue of – they just don’t see what the continent can do,” Folayan says.

He acknowledges that some foreign companies are put off by legitimate challenges such as language and cultural barriers, the lack of universal payment systems such as Visa and MasterCard, and by concerns over the likes of fraud and ingrained corruption. But, he points out, this is where partnerships with local companies like MallforAfrica come in, to “take care of all of that”.

Folayan also notes African e-commerce could help reverse the downward trajectory of retail in the US and UK, where online shopping is eating retail. In 2017 the $12.7bn revenue of US department stores was $7.2bn lower than it was in 2001, according to the US Census Bureau.

“I truly believe that Africa could save many [foreign] businesses,” Folayan says. “Even though retail is having a hard time, it still isn’t looking to Africa as a market where it could do business through online sales. Retail needs to look at Africa in a different light. Ninety percent of US and UK retailers don’t sell into Africa. There is a whole load of money to be made, while the risk can be taken out by going through the right local channels – like MallforAfrica. You just need to ship to our warehouse, after which we can open up the continent to your business.”

Other African companies, like Nigeria-based Jumia and Konga, have also embraced the idea of overcoming the e-commerce challenge in Africa to offer solutions. Jumia became the continent’s first unicorn when, in 2016, it achieved a $1bn valuation after a $326m funding round that included Goldman Sachs.

“The potential is large: Urbanisation means it’s getting easier to deliver, there are more mobile phones, more people are getting credit and debit cards, and using mobile money,” says Aubrey Hruby, co-author of The Next Africa: An Emerging Continent Becomes a Global Powerhouse. “All those trend lines are positive for e-commerce platforms,” she argues.

But the billion-dollar question for investors remains whether the opportunity afforded by Africa’s swelling population outweighs the structural challenges the continent presents. Fewer than a quarter of African roads are paved, and even the most developed countries struggle with access to electricity and frequent outages. Functioning address systems are typically absent, even in capital cities.

“There are some things you can’t change, but what you can do is facilitate,” says Hennie Heymans, CEO of DHL Express sub-Saharan Africa. “Even if you don’t have a physical address, you can establish central points of collection. This is why [local] partnerships are so important. For long-term planning you must have immense patience and persistence. The role of logistics is changing in this new era. Three to four years ago, the traditional way of getting hold of someone for shipping was to ring a call centre, but that’s all changed, and people want access via their mobiles. You have to up the ante and make things available via “digital”.

Savvy customers who know what they want

The typical e-commerce consumer in Africa is young – with an average age of just over 19 – urban, tech savvy, well connected through a smartphone and keen for quality goods. The context, however, varies with each country. In Nigeria most e-commerce consumers are in the capital Lagos, the biggest city in Africa, while in Côte d’Ivoire the majority live in the countryside and are looking online for products not available in local stores.

Fashion, beauty products and groceries are all popular categories among Africa’s e-commerce consumers, while internet services such as booking hotels and flights are increasingly popular.

Ultimately, observers note, African consumers want the same thing as any European or American customer: the largest array of good-quality products at a good price and the convenience of having it delivered to save time – a factor that plays a major role in e-commerce being viewed as having so much potential across the continent.

“Africa always takes longer to catch on to the next craze, but now there is a dramatic change in consumer behaviour,” says Heymans. “Nigerians used to be the highest-spending travellers in international airports, but now those travel attitudes are being channeled via e-commerce.”

At the same time, he notes, retailers are discovering the benefits of e-commerce, such as accessing the international market without “having to pay another cent”, and how, faced with having to pay a premium delivery fee when buying online, customers tend to buy more, increasing the online basket value, in order to make that delivery fee more worthwhile.

The likelihood of widespread adoption of e-commerce is bolstered by the trend of leapfrogging already seen in Africa, whereby local innovation overcomes structural deficiencies – as seen with Kenyan mobile money service M-Pesa, which emerged in the absence of consumer banks to give millions of Africans access to digital finance – as well as by Africans’ ability to combine old and new.

“If you are stuck in traffic in Lagos you could roll down your window and yell for peanuts, handing over cash, or you could get on your phone and go to an app for Chicken Republic and delivery to home,” Hruby says. “In Africa there is fluidity: It’s low and high tech, a 360-degree market.”

The Africa you don’t hear about

“The opportunities are mindboggling, more than you can conceive,” Folayan says. “Africa is such a rich continent. People like dressing well, looking good and have money to spend. It’s not a continent built on debt. People save money to buy the things they want – that’s money to give companies willing to sell in Africa and see it in a different light.”

Currently, Nigeria, Kenya and South Africa dominate e-commerce sales, but the opportunity is continent-wide, driven by the large structural gap between supply and demand.

“E-commerce is here, and those who move first to embrace it will benefit by being here from the start,” Heymans says.

There are also, however, hurdles to the development of e-commerce in Africa, including logistical inefficiencies such as border and restrictive customs procedures, high import and export taxes, and the lack of air connections between the continent’s cities.

“There are pockets of brilliance, but there are obstacles overall. Unless these sorts of factors change, cross-border trade will stay limited,” Heymans says. “Problems cause delays in deliveries. The absolute lack of de minimis tax rules means import taxes for an item can exceed the value of a product. These taxes are meant to protect local industries, but in addition to potentially making an imported item prohibitively expensive, it also means that local industries don’t have to evolve to compete.”

But e-commerce is helping to change previously cautious and protective government mindsets. “Traveling around Africa I’ve noticed a change in how governments view e-commerce’s importance and how they are becoming more comfortable about developing the necessary infrastructure for it,” Heymans says. “Before they viewed it cautiously. It used to be really difficult to arrange a meeting with the head of customs – now they are keen to tap into external experience and thinking.”

The overall lack of internet and banking penetration – about 35% of Africans have access to both the internet and a bank account – also hinder e-commerce. But the percentages are changing in the right direction all the time. In Nigeria, for example, the government is investing billions of dollars in its power generation and transportation systems, pursuing public-private partnerships to improve its technology infrastructure, and aims to introduce an effective address system in Lagos.

The future of e-commerce in Africa could prove even rosier if African leaders succeed in implementing the African Continental Free Trade Agreement (AfCFTA), which would galvanise trade between neighbors. Cross-border trade in Africa only accounts for 17% of commercial transactions, compared to 70% in Europe, 54% in America and 52% in South America.

“I think e-commerce will be one of those unifying things for Africa, like hosting the football World Cup was for bringing people from different African countries together in rooting for other Africans,” Heymans says. “Once that comes into play, intra-African trade will definitely increase.”