It is the responsibility of Africa’s business professionals in advisory positions in the public and private sectors to advise leaders and influential decision-makers objectively, in order for them to make sustainable judgements that will benefit both society and the economy in the long-term. 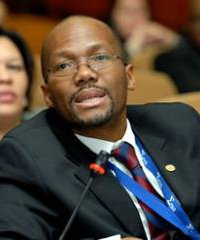 This was the view of Elias Masilela, CEO of South Africa’s Public Investment Corporation (PIC), who recently spoke at the University of Stellenbosch Business School’s (USB) Leaders Angle about the challenges and the role of professionals in advisory positions in the African public and private sectors.

According to Masilela, many of Africa’s professionals in advisory positions are failing to advise objectively and often act to please authorities or simply ‘toe the line’. In doing so, Masilela says business advisors are neglecting their societal duty.

Furthermore, Masilela says that professionals must be willing to defend their principles. “If staying in a job compromises this integrity, they must be prepared to walk.”

“It is only through managing and guiding them towards making optimal decisions that this can be achieved, or else leaders and bosses may end up abusing their power and office. If they cannot do so, then they are not fit to be doing what they are doing.”

Masilela says that professionals must also have the courage to take political positions. “Everything must be viewed in terms of both the economics and political effects of the following three basic questions: who gets what, when and how?”

He says the biggest problem Africa’s professionals have when carrying out a decision made by authority, is that often money tends to determine behaviour as opposed to principle.

Furthermore he urges that when professionals deliver on a mandate it should not be about the person who designs a better infrastructure, or a better health system, but it should be about the broader society. “Nelson Mandela is a prime example of someone who did not think of himself when fighting for freedom, but of the entire African continent. Current leaders and prominent decision-makers in business can still learn a lot from this philosophy,” concludes Masilela.