As you approach the Lake Chad basin from Maiduguri, in northeastern Nigeria, the atmosphere of despair is telling. The air is dusty, the wind is fierce and unrelenting, the plants are wilting and the earth is turning into sand dunes. The sparse vegetation is occasionally broken by withered trees and shrubs. The lives of herders, fisherfolk and farmers are teetering on the edge as the lake dries up before their eyes.

Vegetation and water, the traditional staples of livelihood for the Lake Chad community dwellers, are vanishing. Vultures feast on dead cows as drought and desertification take their toll. The UN Food and Agriculture Organisation (FAO) has called the situation an “ecological catastrophe,” predicting that the lake could disappear this century.

According to FAO Director of Land and Water, Parviz Koohafkan, the Lake Chad basin is one of the most important agricultural heritage sites in the world, providing a lifeline to nearly 30 million people in four countries – Nigeria, Cameroon, Chad and Niger.

Lake Chad is located in the far west of Chad and the northeast of Nigeria. Parts of the lake also extend to Niger and Cameroon. It is fed mainly by the Chari River through the Lagone tributary, which used to provide 90% of its water. It was once Africa’s largest water reservoir in the Sahel region, covering an area of about 26,000 square kilometres, about the size of the US state of Maryland and bigger than Israel or Kuwait.

By 2001 the lake covered less than one-fifth of that area. “It may even be worse now,” says Abbas Mohammed, a climatologist at the University of Maiduguri, Nigeria.

The UN Environment Programme (UNEP) and the Lake Chad Basin Commission (LCBC), a regional body that regulates the use of the basin’s water and other natural resources, maintain that inefficient damming and irrigation methods on the part of the countries bordering the lake are partly responsible for its shrinkage. Emmanuel Asuquo-Obot of the World Wildlife Fund (WWF), an organisation devoted to wildlife conservation, points to the diversion of water from the Chari River to irrigation projects and dams along the Jama’are and Hadejia Rivers in northeastern Nigeria.

As parts of the lake dry up, most farmers and cattle herders have moved towards greener areas, where they compete for land resources with host communities. Others have gone to Kano, Abuja, Lagos and other big cities for menial jobs or to roam the streets as beggars. 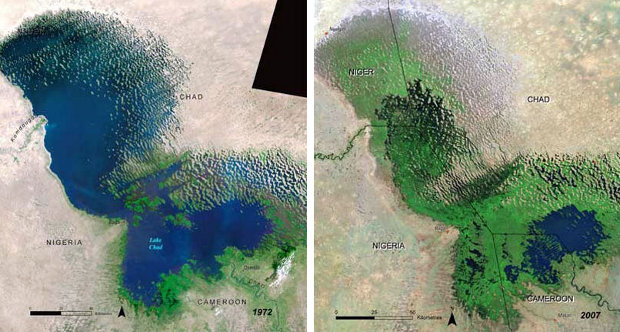 These two satellite images show how Lake Chad has shrunk between 1972 and 2007.

Those who remain in Lake Chad shoreline communities such as Doron Baga are haunted by the speed with which the lake is vanishing. The Doron Baga settlement, which used to be by the lakeside, is now 20 kilometres from its edge.

Alhaji Baba Garba, a 78-year-old fisherman who has spent his life on the banks of the lake, says that much of the village used to be alongside it. Pointing at one of his children in his mid-30s, Garba adds, “even before that boy, Suleiman, was born.” Another villager, Salisu Zuru, laments the death of livestock.

The once busy Baga market in Maiduguri, where truckloads of fish from the lake used to be processed and then transported daily to other parts of the country, is now quiet. The villagers must now travel by canoe and on foot for days from Doron Baga to Daban Masara, then to Darak in search of food. Darak is an affluent fishing community to the east of Cameroon’s border with Nigeria.

The impact of the drying lake is causing tensions among communities around Lake Chad. There are repeated conflicts among nationals of different countries over control of the remaining water. Cameroonians and Nigerians in Darak village, for example, constantly fight over the water. Nigerians claim to be the first settlers in the village, while Cameroonians invoke nationalistic sentiments, since the village is within Cameroonian territory. Fishermen also want farmers and herdsmen to cease diverting lake water to their farmlands and livestock.

The LCBC – established by the leaders of Chad, Nigeria, Cameroon and Niger in 1964 and later joined by the Central Africa Republic in 1994 – and its partners continue to make efforts to save the lake or at least mitigate the impact of its shrinkage on people’s lives. In his book An Inconvenient Truth, former US Vice-President Al Gore shows several images of the lake shrinking from 25,000 square kilometres in 1963 to just 1,500 square km in 2001. However, a 2007 satellite image shows improvements from previous years.

Recent drought may again have worsened the situation, says Professor Mohammed of the University of Maiduguri. He urges the LCBC and its partners to tackle the impact of climate change, as well as to control damming and irrigation by the LCBC countries.

The commission’s member countries have plans to replenish the lake by building a dam and canals to pump water uphill from the Congo River to the Chari River and then on to Lake Chad. The replenishment project “will be the first of its kind in Africa,” says Martin Gbafolo, the LCBC’s director of water resources and environment. The commission has raised more than $5 million for a feasibility study. Although the total cost of the project will not be known until the study is completed, experts like Professor Mohammed expect it will take a huge injection of funds to save the lake.

Already the World Bank is providing $10.6 million for a project to reverse land and water degradation in parts of the lake. In addition, the LCBC is educating livestock herders on gaining access to grazing and watering areas. Water users are taught efficient water-utilisation methods and fishermen more appropriate techniques for catching fish.

At the opening of the African World Forum on Sustainable Development in N’Djamena, Chad, in October 2010, Nigerian President Goodluck Jonathan stressed the collective determination of leaders of the LCBC member countries to salvage the lake. But among the 30 million people who depend on it, there is uncertainty as to how much longer the lake will remain and when they will be able to get a relief.

The article was first published in Africa Renewal magazine