Africa’s most populous nation must spend between US$5-7bn annually in constructing new houses to close the housing affordability gap by 2025. Nigeria has a population of 174m people and struggles with a massive housing deficit exceeding 17m units. 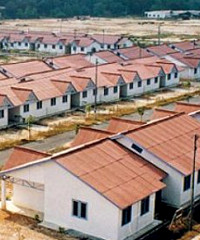 A lack of affordable housing in Nigeria should be seen not only as a challenge but also an opportunity.

According to a recent report by the McKinsey Global Institute, Nigeria ranks among the top five nations globally where low-income families struggle to access affordable housing. The report titled A blueprint for addressing the global affordable housing challenge lists China, Russia, India and Brazil as the other four wrestling with the problem. As a result, medium and low-income households in these countries are forced to live either in slums or in substandard housing.

Nigeria has 11m households in such housing. Hence millions are cut off from educational and health facilities, as well as closer places of employment.

From Beijing to Mumbai to Lagos, the report identifies unaffordability of housing as a growing challenge to cities. McKinsey surveyed 240 of them.

In Lagos, for instance, the report states more than 90% of families are unable to afford standard units at market rates and are forced into informal housing. Lagos, the economic hub, has a population of over 11m according to official sources, although many believe the true figure is more than 20m.

“Lagos is on track to add 1.3m low-income households, of which a majority would not be able to afford housing at market rates. Most will likely make their homes in sprawling slums with poor and unsafe living conditions,” reads the report.

The numbers are set to grow but it should be seen not only as a challenge but also an opportunity.

McKinsey states that attempts to fill the gap should be “a massive opportunity for the private sector”. Besides the construction industry, the finance sector will also benefit since billions of dollars will be required to build and redevelop current substandard units.

“The largest construction opportunities in affordable housing for new units to match the increase in low-income households by 2025 would be in China, Russia, India, Brazil, and Nigeria,” says the report.

As governments and developers attempt to solve the affordable housing problem, McKinsey urges cities to learn from the experiences of Egypt.

The report cites how in the 1960s in an attempt to evade high land costs, low-income housing was developed 30km outside Cairo.

However, due to lack of infrastructure, the ‘New Cairo’ project failed. Even though New Cairo offered decent housing compared with the slums, the poor could not afford to live there because it was too cut off from the city and no nearby jobs were available for its residents. New Cairo now hosts corporate offices and homes for the wealthy.

McKinsey notes the affordability gap can be narrowed by reducing construction costs through the use of industrial techniques, improving buyers’ access to finance, reducing costs to developers and utilising land at the right locations.