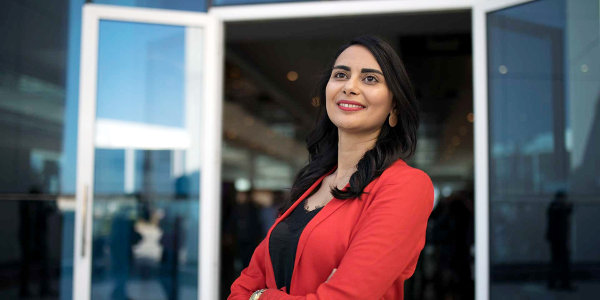 Ameni Mansouri, co-founder and chief executive officer of Dabchy, talks about leaving her job in Paris to launch a start-up in Tunis—and why bigger is not always better.

What sparked the idea for Dabchy?

I am a fashion lover and always dreamed of launching my own start-up. I started Dabchy after noticing there was an online community in Tunisia of women selling clothes through Facebook groups. I knew there was something to it. One day, I was having coffee with a friend. I said, ‘I want to do this. I want to start a platform, but I don’t have a technical background.’ He said, ‘I’m your guy.’

Four days later, we launched the first version of Dabchy. Instead of spending months putting together a beautiful platform, we created something simple that allowed us to learn about our customers quickly, so we could change things and adapt. A year and a half later we launched another version.

Today, we have 300,000 registered users selling new and used clothes across three countries: Tunisia, Morocco, and Algeria. Every month we’re seeing a 30% increase in transactions. In January 2018 the average time it took to sell a product was 49 days, in November it was 1.5 day.

What’s something you did that others might think was crazy?

People are leaving Tunisia to go to Europe, meanwhile I left Paris to go back to Tunisia and start my own business. I quit my job with a stable income and learned everything from scratch. When you launch a start-up, it’s like running a marathon. You don’t necessarily have to be the first to reach the finish line, but you must have the endurance to never give up.

What’s your number one tip for new entrepreneurs?

People get afraid because they think big and sometimes they don’t have the skills or the money to follow through. Actually, you don’t have to start big, you just have to start somewhere. Develop a minimal viable product, test your idea, learn about your customers, and take it from there.

Someone told me that when you become a CEO and you build your first team, your job is to empower them. You have to do less and empower more. I have a team of 10 people now. I listen to them and challenge them. We try to find solutions together.

This article was originally published on IFC’s website under the Creating Markets section.