The Maasai Mara is one of Kenya’s most popular tourist destinations. Every year this wildlife sanctuary attracts hundreds of thousands of visitors from all over the world. 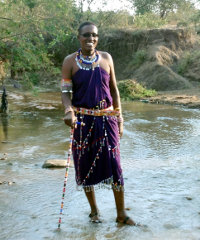 Numerous hotels, lodges and camps have been set up around the Mara to accommodate tourists. Most often they are owned and managed by foreign investors and big hotel chains, rarely by the local Maasai people.

Growing up in the Mara, Nelson Ole Reiyia, 39, saw foreigners set up accommodation facilities for tourists who came to experience an African safari and catch a glimpse of the big five. Maasai warriors would mostly be involved in entertaining tourists – dressing up in their iconic traditional clothing and dancing.

Ole Reiyia told How we made it in Africa that while entertaining guests helped the Masaai warriors earn a living, the income was not sustainable.

In 2009, Ole Reiyia quit his job as a college lecturer to start the Oldarpoi Mara Camp. The camp sits on a 40 acre piece of land and has 11 tents, which can accommodate up to 22 people. There is also a large camping ground where visitors can set up their own tents and do their own cooking. Through the camp, Ole Reiyia also operates a travel business that organises safaris.

“The camp’s clients are tourists from around the world, with about 60% coming from the US,” he said.

Ole Reiyia attributes the camp’s success to offering quality services and a unique experience to guests.

“We are a small camp competing against big names but we are still highly reviewed on TripAdvisor. Our visitor’s book is glowing with positive reviews. We focus on giving people unique experiences,” he said.

Beyond making money, Ole Reiyia seeks to transform the area where he grew up. He rents the land on which the camp sits from the local community. In addition, the camp also pays bed occupancy fees to the community. Through the camp, he has also built a school that currently has 300 pupils.

“We had to approach individuals to sponsor girls to [go to] school. Unfortunately it was not sustainable. [We were] always asking for support from others. I figured I should start a business that would fund the education project and benefit the local community,” he explained.

Ole Reiyia was the first person in his village to go to high school and knows all too well about the troubles children in the area face in pursuit of education.

“I used to walk for 20 km to go to school. I have a passion to help children access education more easily,” he said.

Ole Reiyia’s goal is to inspire more young people from the Maasai community to get actively involved in the tourism business. He would also like to put an end to what he describes as laziness among young people.

“There is an element of lazing around because traditionally the role of a Maasai warrior is to take care of his father’s sheep and cattle, take them out for pasture [and] protect them from lions. Today they entertain tourists. What they are doing is good because it helps protect the culture and they do earn some money, but the earnings are not sustainable and it is not really productive in the long-term.”

He has established an educational centre and library within the camp where the youth are taught skills in tour guiding and environmental conservation.

“We are training [Maasai warriors] to exploit the tourism [potential of] their land,” he said. “We want to show them that if they have skills and some training, they can do more for themselves.”

Some of the challenges Ole Reiyia faces include a lack of capital to expand the camp’s occupancy capacity.

He plans to grow his business, but is taking gradual steps. “I have seen people come with big force trying to build hotels in the Mara and they end up collapsing,” he said.

Ole Reiyia is concerned by the high rate of construction around and in the Maasai Mara reserve. “When I was growing up around the Maasai Mara there were fewer lodges. Now there are hundreds of them. The reserve is not that big; in fact the Serengeti [in Tanzania] is ten times bigger than the Maasai Mara, yet it has fewer lodges and camps.”

He argues that the construction and fencing of hotels and lodges is blocking migration routes used by wild animals. “With all these activities going on, unless something is done, it might not be sustainable. At the current rate, it is like killing the goose that lays the golden egg,” he warned.