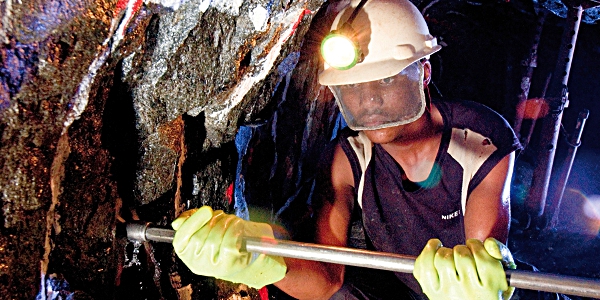 Africa’s mining industry has been through a challenging few years, with a significant plunge in the prices of most mined commodities during 2014 and 2015. In South Africa, for example, Statistics South Africa estimates mining production declined by nearly 5% over the 12 months to November 2016.

However, indications are that prices have stabilised, with commodities in general seeing a significant rebound in 2016. To survive the downturn, companies have focused on conserving cash, operating more efficiently, and divesting from unprofitable projects.

Shirley Webber, Head of Natural Resources at Absa Corporate and Investment Banking (CIB), says due to these measures, miners are generally in a healthier position for the future. “Our clients throughout the continent had a strong focus on cost cutting and they’ve dramatically changed the way they look at their businesses.”

The value of African currencies against the US dollar will continue to have a considerable impact on the performance of miners. “We can’t ignore exchange rate volatility. For example, in South Africa our clients’ costs are paid in South African rand, while the commodities are priced in US dollars. It is something we continue to monitor,” she explains.

According to Webber, political stability and regulatory certainty are critical for African countries to maximise the potential of their mineral resources.

In South Africa, regulatory issues are currently top of mind for mining executives. There has been uncertainty around the Draft Reviewed Mining Charter, a regulatory instrument for governing transformation in the sector. The draft document proposes an increase in percentage procurement spend that must be allocated to Black Economic Empowerment (BEE) compliant companies as well as the abolishment of the “once empowered, always empowered” principle, which means mining companies need to maintain a 26% black shareholding even if the previous black owners have sold their shares to non-BEE entities.

During the opening of the African Mining Indaba, held in Cape Town, the Minster of Mineral Resources, Mosebenzi Zwane said the final Reviewed Mining Charter will be published by March.

African governments are increasingly requiring that ordinary citizens derive a greater benefit from mineral wealth. “In all our travels throughout the continent, we definitely see a very big demand to ensure local content is being developed. Mine operators are being asked to include more local partners in the value chain to ensure more of the money stays in the country itself,” notes Webber.

In recent years there have been stronger calls for Africa to add value to its natural resources as opposed to exporting them in raw form. Webber regards Botswana’s diamond industry as an example of successful local beneficiation. This southern African county has managed to establish domestic diamond cutting, polishing and jewellery manufacturing industries – functions that are typically performed in countries such as China and India. The 2013 relocation of diamond producer De Beers’ international sales operations from London to Gaborone was the pioneering change. It led to the transfer of 80 staff members and their families from the UK. The Government also upgraded the international airport and improved road infrastructure to cope with the expected increase in business and trade. And now, 10 times a year about 200 representatives from the world’s leading diamond manufacturers’ travel to Botswana, which has had a positive impact on sectors such as hospitality and retail.

African miners also need to ensure adherence with environmental and social impact requirements, as failure to comply could lead to substantial fines or the revoking of mining licences. Webber highlights a recent success story of an Absa-financed project in Lesotho, where the mining company spent significant resources in relocating the local community and providing them with decent housing and amenities.

Webber expects further industry consolidation and an uptick in merger and acquisition activity in 2017.

Despite softer demand for commodities from large consumers, such as China and India, she anticipates medium- and long-term consumption to remain robust. There has also been healthy activity in certain industries such as diamond production in Botswana and South Africa and copper mining in Zambia.

“We are optimistic about the mining and metals space for the next 12 months, and I think companies are better placed to make decisions for the year ahead,” she concludes.