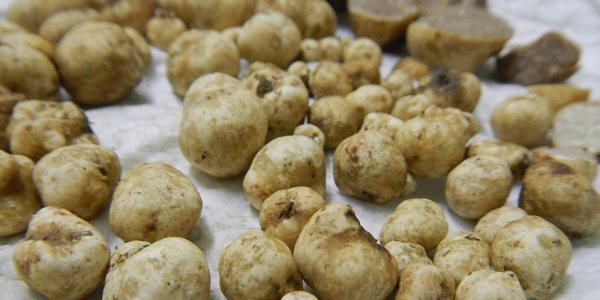 South African mycologist and farmer Leon Potgieter believes he discovered the first Western Cape indigenous truffle six years ago and has been conducting research into its genealogy.

A truffle is a highly prized and wildly expensive species of mushroom, commonly used in European cuisine for its strong flavour. It can take years to cultivate and requires specific conditions to mature – such as a cool climate, high elevation and the right soil pH level and micro-organisms. But those with the right environment and patience stand to make a pretty buck from the fungi.

In South Africa there are a handful of areas or micro-climate pockets that have proven to hold the correct cultivating conditions, and last year the country’s first commercially-produced black truffle was reportedly discovered on a plantation in Mpumalanga.

The Western Cape also holds prime conditions with its cooler Mediterranean climate and soil composition, according to South African mycologist and farmer Leon Potgieter. He runs Truffle Growers SA, under the brand African Truffles, and has about 28 hectares of truffle orchards under cultivation, with a further 30 to be set up over the next two years in partnership with a European company.

His truffle inoculations began around four years ago and Potgieter suspects they will be ready for harvest next year.

And, judging from past Australian export and sale values, he estimates that his South African-grown black winter truffles will sell for a whopping R22,000 (about US$1,648) per kilogram.

An emerging industry in South Africa

Beyond its own production, Truffle Growers SA is also establishing a business around setting up truffle plantations for other South African farmers looking to break into the industry. The company’s services include site analysis, supplying inoculated truffle trees, setting up orchards, harvesting, quality control, and assisting with direct sales and exports.

Potgieter said he has set up orchards on 12 farms already and expects this to increase as farmer education of the fungus grows alongside the local industry. Despite the specific conditions required to grow truffles, he added that truffle production is a lucrative crop for farmers due to relatively low orchard maintenance costs.

“It is easy to maintain. Establishment costs are low if you compare it with the amount of labour and infrastructure (including water) you would need to grow anything else. And it is also a low input crop,” he explained.

“So running costs are low on a truffle orchard. It’s a hands-on approach. All you need to maintain are little trees, with a little water to get them up and growing… And if you can have 50kgs of truffles coming out of the ground, at that price you can make R1m ($75,000) per hectare every season.”

Truffles are grown on the roots of host trees – typically oak, but also hazelnut, pecan-nut, cork and poplar trees – which Potgieter inoculates a couple of times, from seed to sapling, for eight to 12 months before it is ready to be transplanted into an orchard.

One secret, he highlighted, is to grow inoculated saplings in a nutrient-deprived soil with a very high pH level. “Which in effect is not good for most plants and is why you see a lot of truffle trees and truffle orchids actually taking quite some time [to develop] compared to other types of planting, since the soil is much differently prepared to those where you need to put a lot of nutrients down.” 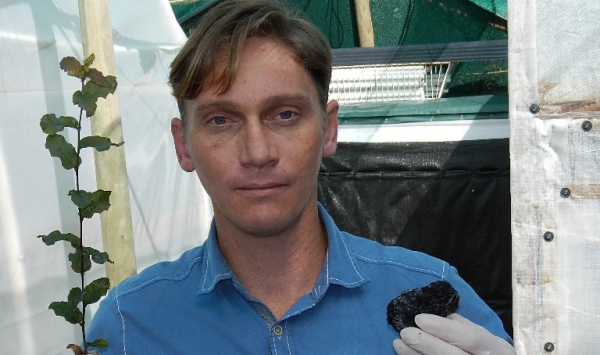 Leon Potgieter has set up truffle orchards on 12 South African farms already and expects this to increase as more and more farmer are educated on truffle production.

He added that often farmers want to grow the truffles on nut trees, with the hope of harvesting both nuts and the fungi. But due to the use of nutrient-deprived soil and lack of inputs such as fertiliser, Potgieter advises farmers to choose production of one over the other.

“Decide whether you are growing truffles or nuts. Because while you will get some nuts [from truffle nut trees] they will be very far-stretched and limited in production – probably 10% of a real nut farmer’s harvest,” he explained, adding that nut trees also attract insects and animals.

“Oak trees in the end would be the best because they are really hardy and they don’t require a lot of maintenance.”

Once the inoculated tree has been transplanted into the orchard, it takes about five years for the tree to mature to the level that it can produce truffles, although this depends on the type of tree and its stage of development. Oak trees, explained Potgieter, tend to be slower growers than hazelnut and pecan-nut trees.

When truffles have grown and are ready for harvest, they produce a pheromone that attracts animals. This is the same pheromone that male pigs emit, and for years female pigs have been used to locate mature truffles, highlighted Potgieter. Today there are training schools to prepare dogs to find truffles, which he believes will grow alongside the industry in South Africa.

Both local and international demand

In addition to export potential, there is also demand locally. “From the Okavango belt to the restaurants in the Gauteng region, they are all looking for truffles because there are not enough available here. To export truffles from Europe to these restaurants just pushes up costs,” noted Potgieter.

“As all these local orchids come into production soon, you will see the market will grow here too.”

In addition, there is potential to process extracts into truffle-flavoured salt and oil. 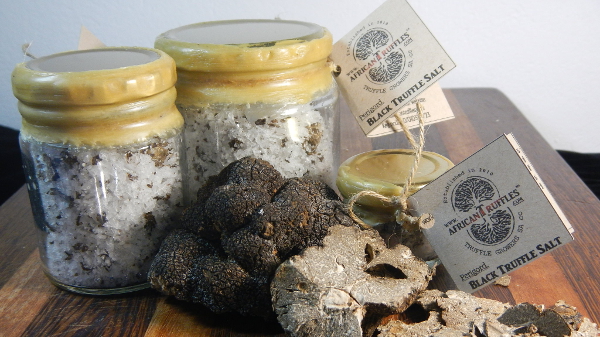 Truffle Growers SA is also producing its own truffle salt to supply the local market.

Potgieter, who has been fascinated with mushroom production since he was a child, also believes he discovered the first Western Cape indigenous truffle six years ago and has been conducting research into its genealogy with his business partner and truffle expert, Dr Paul Thomas.

“In the beginning everybody laughed at me and said, ‘no, it is just a truffle-like fungus’… But after investigation, and I am lucky I have Dr Paul Thomas as my partner, we have ascertained it is an ectomycorrhizal tuber fungus [truffle]. We are still just waiting to complete some genealogy on it and then we will have evidence of whether it is a European white truffle or an indigenous variety.”