Twenty-two-year-old Khaled Shady is the Egyptian entrepreneur behind Mubser, an invention that assists the blind and visually impaired to identify and navigate around everyday objects. 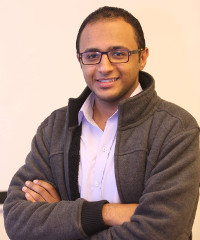 Khaled Shady is the co-founder and CEO of Mubser

Shady’s inspiration behind creating Mubser came from wanting to help a close friend who lost his eyesight in an accident at the age of 15. “So I thought about how I can help him,” Shady told How we made it in Africa.

Together with three other computer engineering graduates from Menoufia University in Egypt’s Shebin El-Kom, a wearable device was created that uses RGB imaging and infrared depth data captured by a 3D depth camera to assist individuals to navigate around obstacles using a system of vibration motors. The device is also able to recognise staircases, doors and chairs and can name these objects to the wearer through a Bluetooth-connected headset.

Shady and the Mubser team are still refining their prototype. “We have given two prototypes to people to use in real life and then we will take their feedback and enhance it, and add it to the next prototype that we are working on,” explained Shady.

He added that his vision is to add more features to the device so that blind individuals can accurately imagine all their surroundings. “It’s about the future for them; that’s how I keep thinking about the platform itself. So in the next five years I see Mubser as being the sixth sense that they depend on.”

Shady, who also studied entrepreneurship and innovation at the Kelley School of Business at Indiana University in the US, said combining technology with entrepreneurship holds solutions to many of society’s problems.

“I found that entrepreneurship and technology could be combined to help [my friend] and other kids just like him,” he explained.

“Mubser was our team’s graduation project [at Menoufia University] and we decided to take it to the next level to make it a startup to support the millions of blind and visually impaired people.”

He added that it is important his device is affordable, especially in Africa and other developing regions where there is a greater need for affordable solutions that support the blind. “So it can reach the people who really have a need for it,” he emphasised.

Egypt’s current political instability has halted many of the economy’s industries which not too long ago served as a hub between Africa and the Middle East. Shady said he and his team have been looking at potential manufacturing partners for Mubser in countries such as China and the US.

“There is some uncertainty about this next step. But now Mubser is incubated at Venture Lab at the American University in Cairo, one of the largest incubators in Egypt,” said Shady, adding that he has also been talking to mentors from other countries who are able to advise him about manufacturing.

“So hopefully in the coming months we can get over this challenge and travel to find a good place to manufacture the prototype.”

Last year Shady was one of the finalists for the Anzisha Prize, a competition which recognises and celebrates African entrepreneurs under the age of 22 who are using entrepreneurship to solve problems in their communities. He said the organisation has opened doors for Mubser and helped connect the startup with mentors and investors in the African market.

His advice to other young entrepreneurs in Africa is to act locally, but think globally.

“I always say that if you are doing what you are doing in the local market well, with a global thinking, you will be impressive for anyone in the world to start working with you. So act local, think global, this is my strategy. In my local market I know every detail about everything I should know to make Mubser happen.”

He added that the nature of the African market provides local entrepreneurs with opportunities to be successful.

“Africa is an emerging market so everyone is looking for the next step for it,” continued Shady. “If you know your local market very well people will come to you and say, ‘let’s do it together’. So this is my strategy for success in the African market and the Arab region as well.”