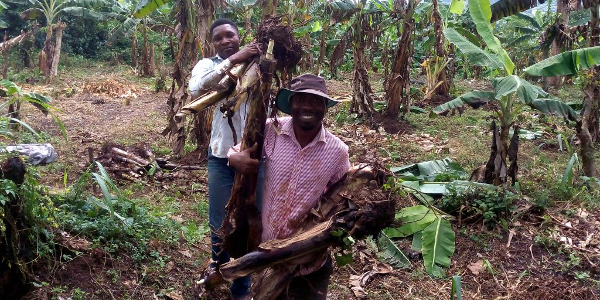 Lawrence Afere is the founder of Springboard, an organisation that combines organic farming with entrepreneurial training to create jobs and promote sustainable agriculture. The initiative led him to be named a Mandela Washington Fellow last year, where he visited the US and spent a few weeks meeting President Barack Obama and a number of global business leaders.

In 2007, when Lawrence Alaba Afere graduated from university, he shocked his family with the news that he was not going to use his business management degree to land a high-paying job in the big city. Instead, he wanted to pursue social entrepreneurship in agriculture in his hometown Akure, a low-income community in southwest Nigeria.

“It was a difficult decision because my parents and siblings were not happy that I was returning home. They expected I’d get a job in the city and then be able to help them as well.”

His family thought he must be bewitched. After all, who would willingly choose the hard labour of farming over a high-paying job? “But I told my parents: ‘Please dad, please mom, I need to do something different with my life.’”

And that is exactly what he did. Today he is the founder of Springboard, an organisation that combines organic farming with entrepreneurial training to create jobs and promote sustainable agriculture. It offers young people a six-month course that teaches practical agriculture and business skills. Participants are also placed into groups and provided with inputs and farm land which they are responsible for cultivating. After harvesting, each group gets 80% of the profit, with the remaining 20% being reinvested into the sustainability of Springboard.

And Afere’s parents could not be prouder. The organisation has not just generated stable incomes for himself, but for many other youths in his community. His initiative has also led him to be named a Mandela Washington Fellow last year, where he spent a few weeks in the US meeting President Barack Obama and a number of global business leaders.

Social entrepreneurship was not Afere’s initial plan when he gained admission to study business at university. Like many in his class, he was excited about a job within the banking or oil and gas sector. “And I studied really hard so I could come out with good results that could get me a good job.”

But he will never forget the exact moment this all changed for him. It was Friday, November 17, 2006. He was at the library, catching up on some news before hitting the books, and came across a report released by the minister of education. It revealed some shocking statistics about unemployment, and how the majority of young people finishing school were unable to find work. But most shocking of all was the predicted effect this would have on the population.

“And so all my plans for life, for everything, changed from that. I decided that rather than just getting a job, let me rather help young Nigerians get jobs – and in the process get something going for myself.”

Once Afere knew he wanted to be a social entrepreneur focused on youth empowerment and job creation, the next step was to work out where he could best do this. Nigeria’s under-utilised agricultural potential caught his attention.

“If you combine agriculture with youth, you can transform this country within years. And that’s why I decided I’m going to help do that.”

In 2008 he started the Youth Farm Project which brought together young people in his community to cultivate some donated land. The initiative started to grow and was renamed Springboard in 2012. It has trained over 500 youths since inception. And the programme is also scaling up operations so it can train 100 people every six months.

“We currently have access to over 15 hectares of farm land, and the community is willing to give us more land if we have more young people to train.”

Towards the end of last year, Afere also managed to raise enough capital to start construction on a plantain chips processing and packaging factory. And last month it began production of Springboard’s branded plantain chips. They are already being sold in three Nigerian states, and Afere plans to distribute to other African countries in the future.

Farming is a business

According to Afere, one of the initiative’s goals is to change the perception of farming amongst Nigerian youth. Many do not view it as an attractive career path.

“Especially the young people in the rural and semi-urban areas; they have seen their parents over the years suffer as farmers… They are so poor and the middle men make more money than they do. And so these young people are discouraged. This is one reason why they want to leave rural areas and go to the cities in search of jobs.”

To slow this trend Afere hopes to make agriculture “fashionable” among youth. “We help them to see there is a good market for produce, and that you can actually become wealthy cultivating the land.”

The initiative also teaches business skills, such as how agri-preneurs can get produce to market without using middle men that cut into profits.

“Farming should be a business. It should not be seen as something only poor people do. You can build your farm and it can become a great business. So we teach farming as a business. And if you run your business well, it can help you earn a good income. So that’s what we help them to see: they are a farmer and they are an entrepreneur.” 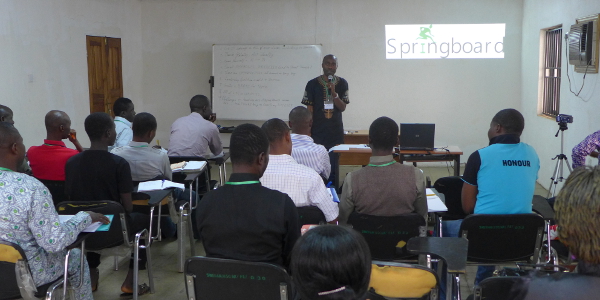 The programme, he explained, shows that good farmers and good entrepreneurs have a lot in common. For example, to nurture and grow both crops and companies require hard work, teamwork, re-investment, time-management, planning ahead and patience.

“A farmer must be patient, allowing his crops to grow and mature before harvesting. The same thing with entrepreneurs – they sacrifice instant gratification for long term success,” he continued.

According to Afere, he has seen some positive changes over the past two years as more young people begin to see benefits in agriculture.

“I tell you, every day on social media you see a lot of young people putting their pictures on Facebook and telling their friends that they are farmers right now. So young people are coming to realise one way for Nigeria to grow out of this huge unemployment is by going back to our past love, which was agriculture.”

He advises others who want to pursue entrepreneurship to be aware of the risks, and make sure they are driven by something greater than a big pay-cheque.

“Regardless of how much you are being paid, it  doesn’t compare with the reward that comes when you follow the path of entrepreneurship, because entrepreneurs change the world. So ask yourself – do you want to transform this world?

“For me I want to do a very big thing: I want to change this world. And I have started doing that in my small community here in Nigeria.”