Mozambique’s economy is expected to grow at 7.4% this year, making it the tenth-fastest growing market in Africa. The country’s developing coal mining industry is one of the major drivers of economic growth. Standard Bank analysts Yvette Babb and Simon Freemantle recently produced a report looking at five structural trends shaping Mozambique’s economy. Here are the highlights. 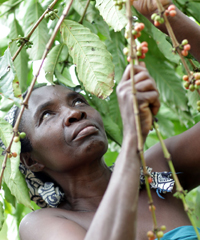 Almost 65% of Mozambique’s land is defined as agricultural.

“Across Africa, demographic shifts are creating meaningful opportunities, as well as daunting challenges, for the continent’s emergent economies. And Mozambique is no exception,” says the report.

With a population of roughly 23 million people, Mozambique is the tenth most populated country in sub-Saharan Africa, and has a population growth rate estimated at 2.2% for the next decade. Mozambique’s median age is at the lowest it’s been – at 17.8 years – well below the world average of 29 years. “Forty-five per cent of Mozambique’s population is younger than 14, and 65% younger than 24,” according to Standard Bank’s research.

However, weak institutional capacity suggests that this demographic dividend will continue to be intangible until the necessary government reforms and incentives are directed to provide economic betterment for Mozambique’s youthful aspirants.

This urbanisation growth is “swelling existing urban nodes” according to the report. Currently, Maputo’s population is estimated at 1.6 million, over double what it stood at in 1990, and will increase by approximately one million people by 2020.

However, the UN estimates that close to 70% of urban growth in Africa is occurring in cities with less than 750,000 people and this trend extends to Mozambique. Resource rich urban nodes like Tête is already showing clear growth, while Nacala and Pemba are expected to expand due to gas discoveries in the region.

Urbanisation, which creates economies of scale for businesses and encourages investment in infrastructure, provides a range of economic benefits. “Urban centres, for instance, provide markets for agricultural goods from rural small-scale farmers, and urban-based family members (who earn a higher wage on average) remit money home to rural families,” explains the report.

However, the development of slums and a strain on inadequate infrastructure in urban sectors are some of the threats urbanisation could bring about.

Telecommunication penetration is rising steadily, although originating from a low base. Standard Bank’s research estimates that there are 7.9 million mobile phone subscriptions in Mozambique and by 2016 this is expected to grow to 10.9 million, an estimated 40% penetration rate. In addition, around 1.2 million Mozambicans have internet access, although a lot of this is via mobile phones. Within the next five years, internet penetration is expected to rise to 2.6 million.

The report says that government and private initiatives are supporting rising telecommunication penetration and new fibre optic cables have the potential to also increase broadband connectivity. For example, the National Communications Institute of Mozambique issued a national 15-year 3G licence extension to the two main service providers – Mcel and Vodacom – in November 2011.

“According to the terms of the new licence agreements, both operators are expected to expand their 3G networks to all districts of the country by December 2015,” adds the report.

Almost 65% of Mozambique’s land is defined as agricultural, according to the UN Food and Agricultural Organisation. What is interesting is that the country is ranked sixth in the world “in terms of the weight of available, under-utilised cropland, with an estimated 4.7% of the world’s total,” continues the report.

Eighty per cent of the working population is employed in the agricultural sector and this has led to a number of governmental plans, partnerships and programmes – as well as private investments – being established to promote and support agricultural production and improve food security.

“It is estimated by the Ministry of Agriculture that investments of over $3bn are required between 2013 and 2017 to ensure the country becomes self-sufficient in food,” states the research. “Beyond government and donor support, private sector funding will be critical.”

Due to population growth, urbanisation, elevating incomes and economic development, the financial sector is developing in Mozambique but still has a long way to go. A 2010 FinMark Trust/EFinA survey indicates that almost 80% of adults are entirely financially excluded while only 12% use a commercial bank product and 5% use an insurance product.

According to the Economist Intelligence Unit, if the country continues to grow economically and boost stability, bank claims are estimated to increase by 150% in a decade. “The development of strong financial systems will undoubtedly continue to play a pivotal role in ensuring more rapid and inclusive growth in Mozambique,” states the research.