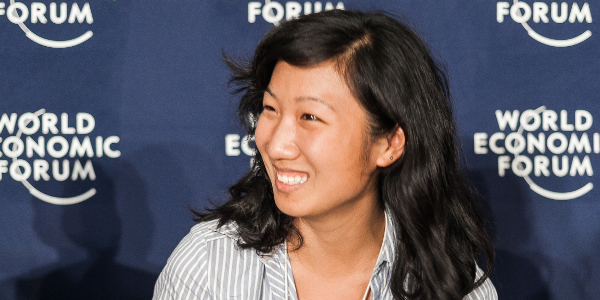 The journey to establishing Moringa School almost had a false start: at the time news on fake education institutions was being highlighted by the media.

However, Audrey Cheng’s drive could not be stopped, and she has now grown the company from only four students in January 2015 to over 600 students this year alone.

Take us back to the beginning of the business.

In 2014, Cheng was working for Savannah Fund, a venture capital firm that invests in early stage technology companies across Africa. “It was based in Nairobi at that time, and I had the pleasure of running their second accelerator class. We had companies from all over Africa,” she says.

Her work there – nurturing growing companies – would point her to the biggest challenge the startups were facing: finding high-quality tech talent. These companies needed highly skilled employees who could accelerate the growth of the company.

“As I was helping them source those candidates, it became clear that finding high quality talent was hard in this market,” she explains.

After doing her research on university courses, Cheng realised that there was an education gap that she could fill – she had found out that the curricula for computer science at universities were mostly theoretical and outdated and could not prepare students for the workforce.

“Students struggle to find jobs, and in Kenya it takes an average of five years for a university graduate to get a full-time job,” she says. “On the other hand, employers cannot find the skills they need. I realised that if we talk about building the ecosystems, we need to build skills first. So that’s how we started Moringa.”

How did she grow the company into the business it is today?

When Cheng drafted her plan to put up a learning institution, it aimed to not only offer skills but also to provide job placements for hundreds of students who would be churned out every year.

“We really hustled to start the first class. We didn’t have any stories to tell: it was all based on our ability to sell the courses to potential students,” Cheng recalls.

An infamous story on fake certificates being offered by unauthorised institutions posed a great threat to their launch, since her concept was new in the market. However, her resilience and belief in the company pulled them through.

“We started our class in January 2015 after spending time doing a lot of research in understanding what partners we should be working on, building the content and finding teachers to start our first class.”

That class started with four students but has grown quickly.

Moringa School now has a team of about 55 employees and over 600 students.

This year, the school was honoured by business media brand, Fast Company, as one of the world’s most innovative companies and it was also a runner-up in the 2018 Pan-African Awards for Entrepreneurship in Education.

Currently there is a campus in Rwanda running programmes with the government and GIZ (Deutsche Gesellschaft für Internationale Zusammenarbeit), to train 150 women in tech.

Cheng says there is great demand, but they are trying to be realistic on how to grow in a responsible way while offering high quality experiences for students.

Moringa has a 95% job placement rate and has provided talent for the big companies in and around Kenya.

Keeping her focus with the advent of success has been challenging. Even with growing demand, Cheng has to steer the company away from propositions that would interfere with her plan for the future.

“When we take an opportunity, we have to ask: is it in line with our strategy and how we would like to grow? Is it distracting? Even if a proposition involves a lot of money, if it’s distracting, we have to say no,” she comments.

“The challenge right now is to ensure the team is aligned on the decisions and opportunities we have to make good long-term decisions for the company,” Cheng says.

Introducing a new concept in any market comes with challenges as well as lessons. For Cheng, growing a competent team can get the hard work done.

“Having a really good team matters. We spend a lot of time communicating with the team,” she says and stresses the importance of having the team buy into the strategy and future plans.

“Ultimately our frontline team members are the ones who are implementing, so we need them to be excited and to push our strategy.”

She encourages other budding entrepreneurs to create a culture of focus. “I see a lot of entrepreneurs trying to tackle five things at a time, which is really hard. If you are trying to do more things, it is hard to scale and to serve more people.”

Her one reason for success can be summarised into one word: resilience. Cheng says there were many times that she thought the company would close due to the challenges she faced, including doubts about the market fit for her product. “But there has been an amazing amount of focus and resilience,” she says.