Kenyans can now access quick loans from their nearest kiosk thanks to a new product called Pesa Pata that targets the unbanked and low income earning individuals who would traditionally not qualify for bank loans. 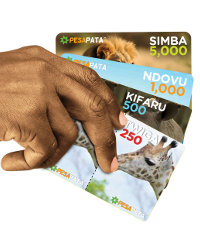 Pesa Pata (Swahili for ‘get money’) has been unveiled by Paddy Micro Investments, a micro-finance institution founded in 2008.

Pesa Pata uses an agency model where the kiosk owner is the agent. At the kiosk the customer is given a Pesa Pata scratch card of a value between US$3 and $59. Each card has a unique number that is then loaded onto the customer’s mobile phone. The amount is then credited to the customer’s Safaricom M-Pesa mobile money account.

Joyce Wangui, a director at Paddy Micro Investments, explains that Pesa Pata seeks to bridge the gap in access to credit for low income earners who lack pay slips or any other form of collateral.

“We realised that there are times when people need instant cash and going to a bank or micro-finance institution for a loan is not an option. Other people who work in the informal sector at most times cannot even qualify for bank loans,” says Wangui.

The loans are repayable at a 5% to 10% interest rate. The kiosk owner makes a profit from the interest. The model is dependent on the level of trust between traders and their customers.

“Anywhere you live you will have a relationship with a kiosk owner. When you don’t have money you take milk or sugar on credit. The kiosk trader knows you and trusts that you will pay for the goods. Instead of taking goods on credit, the kiosk trader will now lend you money in the form of a Pesa Pata scratch card,” she explains.

The new service is already proving to be popular just one month since its launch. So far thousands of kiosk and shop owners countrywide have signed up as Pesa Pata agents.

Felistas Wanja who runs a shop along Jogoo Road in Nairobi explains that Pesa Pata has become an extra source of income for her.

“Last week one of my loyal customers had a sick child and she needed money urgently. I gave her two $59 Pesa Pata cards. When she paid back I made profit of $5 on each card. In the past people would take sugar on credit, now I give them the card, they buy goods in cash and at the end of the month I will make a profit when they repay the loan,” explains Wanja.

Leah Wanjiku who owns an auto spares shop in Eastleigh Estate in Nairobi says she has invested over $2,400 in Pesa Pata cards.

“If I give you a card you must pay back in 15 days. I only lend to people who have jobs or run a business. If I don’t know you well enough, you will have to bring someone to guarantee you,” says Wanjiku.

Wanjiku and Wanja say that one of the challenges they face as small traders is having to sell goods on credit, especially towards the end of the month. This affects their cash flow and ultimately their profitability. They say Pesa Pata has helped solve this, since they can now lend money through the cards, sell their goods in cash and still make a profit.

The cards are also a safe way for traders to handle large amounts of cash. It is practically impossible to activate the scratch cards without the kiosk owner’s knowledge since they each hold a secret number that is needed to transfer money from the card to an M-Pesa account.

Paddy Micro Investments’ Joyce Wangui grew up in a family that has been in business for many years. When she completed her studies she joined the family business, which was dealing with fast-moving consumer goods. It is here that the idea of starting a micro-finance institution was conceived.

“I interacted with clients and discovered that a lot of people could not buy goods in cash. We sold a lot of goods on credit. The banks did not finance these people since they did not have collateral,” she recalls.

With the fast rising popularity of Pesa Pata among shop owners and clients, Wangui is targeting to reach 7 million users by December 2012.

Wangui would not disclose how much money she has invested in rolling out Pesa Pata, but confirmed that launching such a platform is capital intensive with heavy investments towards manufacturing the scratch cards, marketing and building software.

“We expect to break even in the next three months,” she says.

Wangui argues that Pesa Pata is the next big innovation and hopes to see it grow beyond the heights of internationally acclaimed M-Pesa.

“We see ourselves going to the rest of Africa. Across the continent, small entrepreneurs and low income earners face the same challenges. In the next two years we will be all over Africa,” she says.

Wangui is also building a new platform that will eliminate M-Pesa agents from the Pesa Pata chain to counter the extra costs clients have to pay to withdraw money via the mobile money transfer platform.

“We want to build our own platform so that when you get a Pesa Pata card on credit and load the money to your phone you will be able to cash it at the same kiosk. The M-Pesa withdrawal charges our clients have to pay now are unfair and a big challenge,” says Wangui.