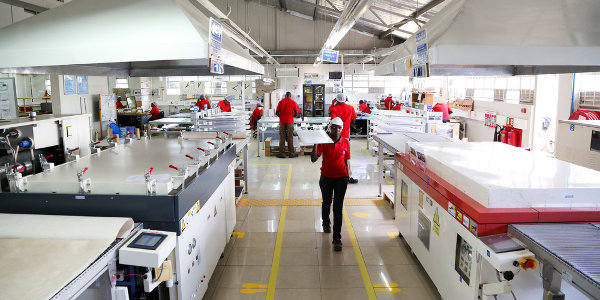 In 2011 a group of investors opened Kenya’s first solar panel manufacturing plant in Naivasha, about a 90 minute drive from the capital Nairobi.

Solinc, formerly known as Ubbink East Africa, manufactures solar panels of 20W to 250W. It is also involved in the assembly of complete home solar kits that include batteries, phone chargers and LED lights.

More than 80% of the company’s solar panels are sold in Kenya, with the remainder retailing in Uganda and Tanzania.

“We sell the whole range, even in rural areas. You have people who want a 20W for a few lights and phone charging, but there are also customers who do have money and want to [power] their fridges and TVs and they buy the large-sized panels,” says Haijo Kuper, co-founder and managing director of Solinc.

The company was set up with an initial investment of about $3m. Its current manufacturing capacity is 140,000 solar panels per year, and it is now set to double this within the next 18 months to meet rising demand in East Africa.

Over the past decade, the prices of solar panels have gone down, making them more affordable for households in off-grid areas. Innovative financing options rolled out by companies such as M-KOPA and Mobisol, which operate pay-as-you-go models, has also widened access, particularly for low-income consumers. M-KOPA has connected more than 200,000 households in Kenya alone, while Mobisol – which operates in Rwanda, Tanzania and Kenya – has sold over 40,000 systems.

“Distribution of the different players has become more efficient. Because of the increased scale, [companies] can now go a level deeper into the rural areas,” says Kuper.

“We are about to hit limits of what we can do in Kenya through dealers because 90% of the shops – especially in rural areas – that sell solar products stock our brand. So further growth for us is really in Tanzania, Uganda, Rwanda, Burundi, the Democratic Republic of Congo and South Sudan. We are already in Tanzania and Uganda but there is a lot to be done to develop that further.”

“The competition is basically 90% Chinese,” says Kuper. “There is still a price gap between our products and [those] from China but that price gap is diminishing.

“Interestingly, enough people in rural areas, especially if they have little to spend, are very careful about the quality they buy. So as long as our products are close enough to the cheap Chinese options, people do appreciate the quality we offer, the warranty, and of course the proximity to our dealers.”

But being the first solar panel manufacturer in Kenya came with numerous hurdles. The biggest challenge for Solinc has been changes in regulations on solar products and the components used in manufacturing. Between 2013 and 2015, Kuper says VAT and duty regulations changed three times. One foreign investor in Solinc opted out of the business due to these uncertainties.

“Changes in regulation affect price and demand. [At one point] we’d anticipated growth because normally towards Christmas you tend to see dealers stocking more. But [after some changes in regulation] people stopped stocking. Our demand halved, we had idle people at the factory and we still had expenses. We nearly went bankrupt,” says Kuper.

“If I told my wife I am going to set up another solar factory somewhere in Africa, she will either divorce me or kill me – and I don’t know which one is the better option. We were not expecting the tough challenges we have faced.”

But there have been positives too that have played in favour of Solinc, adds Kuper, pointing to the availability of talented people to work for the company.

“I have been able to get good people who support me in running the business. We have over 100 people and I am the only expatriate. We also made deliberate decisions to have tight controls on expenses. I also spend only half of my time at the company.

“I find it enjoyable to work here. In Europe we are scared. There is fear that we’ll lose what we have. But here people have a positive outlook – they believe things will get better.”