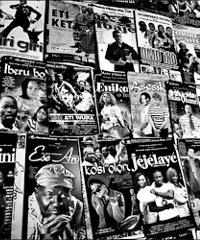 Nollywood produces about 2,000 films every year.

After India’s Bollywood, Nollywood is the second largest film industry globally in terms of the number of films released. With over 2,000 releases annually, Nollywood beats Hollywood in volume terms.

The report also pointed out that Nollywood films have a large foreign market found in the African diaspora, with significant numbers living in the UK, US and South Africa.

“Arrivals to Nigeria are expected to record a 3% compound annual growth rate over 2012-2016, mainly due to intra-regional tourism fuelled by expanding African economies,” stated the report. “The popularity of Nollywood will be a major growth driver with the leisure sector, attracting film fans and business travel boosted by the growing economic importance of the film industry.”

Nigeria’s capital Lagos is the heart of Nollywood, with many films being shot in the city’s Festac area. This year saw a boom in hotel openings in Lagos as well as hotel expansion plans in the country, which Euromonitor attributes to increasing tourism flows. With major international hotel groups – such as Starwood Hotels & Resorts, Hilton Worldwide and Radisson Hotels – expanding their hotel base in Nigeria, the country is paving the way for increased tourism and travel.

“The region is poised for continued strong growth in arrivals, incoming tourist receipts, air and hotel value sales in 2013,” said Euromonitor. “Intra-regional travel is crucial for the African tourism industry, due to strong business, linguistic and cultural links between many countries.”

In addition, there are a number of film villages that are currently being developed across the country. “Abuja Film Village, Plateau Film City and Lagos Film City aim to boost the film industry by providing modern film, TV and audio production facilities, and also encourage tourists to visit,” highlighted Euromonitor’s report.

As Nigeria’s movie industry develops and produces films of improving quality, movie stars will become another attraction for tourism in the region.

According to Euromonitor, over the years Nollywood has helped to change some of the negative stereotypes about Nigeria by highlighting its colourful culture, social norms, creativity and hospitality. This has led to Nigerian President Goodluck Jonathan referring to Nollywood’s stars as Nigeria’s greatest ambassadors.

“For now, Nollywood is the greatest ambassador we have,” said Jonathan to a group of Nollywood practitioners who paid him a condolence visit over the death of his brother last month. “You are those who market this country positively in other African countries and even outside Africa, and even in the Caribbean, they appreciate Nigeria because of Nollywood.”

“For now, we don’t have any other group that is as important as Nollywood because you have been able to bring some reputation, some hope to this country,” added Jonathan.