Poor infrastructure is one of the biggest factors keeping Central Africa from achieving its full growth potential. 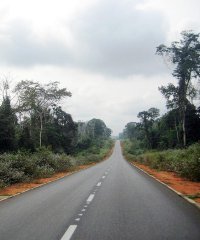 According to the AfDB, asphalted roads represent less than 20% of Central Africa's entire regional road network.

“The region stands out on the continent as one with the least infrastructure network, particularly transport and energy, which impacts negatively on production capacities and regional trade as well as social conditions and welfare,” notes the Bank.

Around 80% of people and goods in the region are transported by land, however, asphalted roads represent less than 20% of the whole regional road network.

Deplorable road transport infrastructure is impacting negatively on trade. On average, Central Africa’s exports accounted for 0.2% of global exports from 1999 to 2008, compared to 0.6% for West Africa, 1.2% for Southern and East Africa and 1.3% for North Africa. The AfDB notes that non-tariff barriers to regional trade include the poor state of major highways, as well as robbers and random checkpoints along corridors.

In terms of maritime transport, Central African ports have limited capacity, which contributes to high freight costs. “The major ports in Central Africa are ill-equipped to handle the burgeoning maritime container transport. The waiting period could take up to 80% of the total delivery period . . . compared to 20% in East Asia. This situation, coupled with limited transport facilities, has contributed in substantially raising maritime transport costs,” says the report.

In the area of air transport, Central Africa suffers from a lack of connectivity between countries due to limited airport infrastructure, among other reasons. Railway systems in the region are also not connected and many railways lines are currently obsolete and underused. Inland waterways should also be better utilised and further developed.

Much hope rests on the DRC’s Inga hydropower project. The Inga Dams are located on the Inga Falls in the western DRC. Phase I covers the rehabilitation of the Inga I and Inga II facilities in order to restore their nominal generation capacity of 1,775 megawatts (MW). Phase II covers Inga III or Grand Inga. Reuters recently reported that the DRC expects the Inga III project to start producing electricity by 2017/18. A pre-feasibility study on the 4,300-5,000 MW Inga III plant, as well as the separate 40,000 MW Grand Inga project, is expected by September this year. It is envisaged that the Inga project could supply electricity to countries such as Nigeria, South Africa and Egypt.

The AfDB says that any infrastructure development should, however, be sensitive to the preservation of the Congo Basin, which is “vital for humanity”. The Congo Basin is the world’s second-largest tropical forest area, regarded the second lung of the planet.

“Any investment, especially in infrastructure, should seek to preserve the region’s ecosystem and biodiversity.”