It was well after 7pm in Akwa – a commercial centre in Douala, Cameroon – and yet the sound of traffic and vendors on the street showed no sign of dying down. The team at online marketplace Kaymu was also still hard at work. With plain white walls, the small office offers little in the way of distractions. Everyone’s eyes were intently focused on their computer screens. 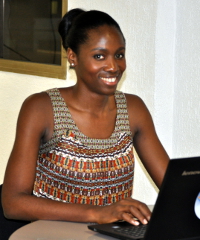 It is not uncommon for offices in Douala to close after 8pm, as most try to avoid the traffic home. But according to Candace Nkoth Bisseck, Kaymu’s country manager for Cameroon, for her team it’s about getting as much done as possible before going home.

Despite a rising number of players and new entrants in the market, online shopping in Cameroon has not yet been embraced as much as it has been in South Africa and Nigeria. According to 2013 World Bank data, only 6.4% of its 22 million population are internet users. Yet despite the limitations e-commerce faces, the industry does hold strong potential. This is due to Cameroon’s less developed formal retail sector (with Nielsen estimating that 98% of shopping happens informally) and consumers increasingly looking for unique and ‘trendy’ deals.

According to Nkoth Bisseck the business is seeing increasing interest as consumers search online for unique and “trendy” products they can’t access locally. “People are very fashionable, trendy… they like to be different. So if you can offer something unique and at an affordable price – jackpot!”

Sellers using the platform in Cameroon range from an individual who wants to sell an unwanted handbag they received from a relative in France, to small retailers and entrepreneurs hoping to reach a larger consumer base, to established companies such as MTN who want to make their handsets more easily available.

However, there are a number of challenges that e-commerce faces in the market. Like most countries across the continent, Cameroon has a low penetration of bank cards which limits the potential for online purchases. One way Kaymu is combating this is by introducing a mobile money payment option, which they officially launched last week through their partnership with MTN.

Another challenge is the lack of a formal address system. With cities such as Douala expanding so quickly, there is the problem of finding locations for deliveries, as destinations often lack street names and numbers. To combat this, Nkoth Bisseck explained that customers often need to be more specific when explaining where they are located.

“They have to tell you if they live in front of this or behind that, as their address can sometimes be very hard to find. It is not as straightforward as in other countries. So yes, this is one challenge we had to adapt to.”

Educating for the long haul

A general lack of computer literacy in the country, especially among sellers, is another challenge. “Some have never heard of an online business before or even touched a computer in their lives,” she added.

The fear of internet scams have also made many small retailers reluctant about selling their products online. For this reason, Kaymu along with other AIG ventures, are investing in educating their consumers and sellers on the benefits of e-commerce.

“So we have a dedicated team focused on educating the sellers, helping them, coaching them on a daily basis, calling them up about orders, and so on… It takes time, but we are seeing high profile sellers rising up from this treatment. For example, we had one woman who never had a computer or touched a computer in her life, but has been steadily becoming the top seller on Kaymu,” Nkoth Bisseck highlighted.

“We see these little miracles happen, and so we believe and we work harder. We know it’s not going to happen overnight but it will in the end because people are becoming more interested.”