Ghana and Nigeria will this year be among the three fastest growing economies from a group of 25 global rapid-growth markets (RGMs), according to a new Ernst & Young report. E&Y defines RGMs as countries with economies and populations of a certain size that display strong growth potential and are, or could be, strategically important for business. 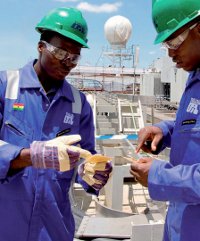 Ghana's oil industry has been a major driver of economic growth.

The report notes that economic expansion in the 25 RGMs has started to slow sharply since the beginning of 2012, but this will only be a temporary blip. “Our analysis suggests that RGMs are likely to weather the ongoing eurozone crisis and remain engines of global growth, though many will see expansion slow this year,” says Alexis Karklins-Marchay, co-leader of the E&Y Emerging Markets Centre. “Their expansion is expected to accelerate once more in 2013, helping stimulate a wider pick-up.”

According to the report, the RGMs have the necessary tools available to ease both fiscal and monetary policy allowing growth to continue towards the end of the year. Among the 25 RGMs are Africa’s Ghana, Egypt, Nigeria and South Africa.

The report estimates stable GDP growth in Ghana this year as oil output rises gradually. However, the pace will slow from 14.4% in 2011 to about 8.5% as last year’s hike in GDP (due to the start of oil production) drops out of calculations.

“While Ghana will only be a small oil producer, production of the commodity has boosted medium-term growth prospects,” says E&Y. “We forecast GDP growth of around 7% in 2013 and an average of some 5% annually over the medium term. Oil exports should also help to bolster the public finances and the balance of payments, which have been affected by higher government spending.”

The non-oil sector – led by telecoms, construction and retail – is driving expansion of the Nigerian economy. However inflation fears still persist.

“With non-oil sector growth likely to ease due to the weaker global economy and oil output rising slowly, we forecast GDP growth of 7% in 2012, a little below the budget assumption of 7.2%,” notes the report. “A rebasing of the national accounts is expected in the third quarter. This may see a 40% rise in the level of GDP, and improve some key economic ratios.”

In July to October 2011 the Central Bank of Nigeria raised interest rates sharply, in an effort to lower the double-digit inflation, and has kept them on hold since. “The partial removal of fuel subsidies in January will lift inflation to 14%-15% by mid-year; together with concerns about high public spending, this means no early cut in rates.”

Near-term growth prospects remain subdued in Egypt as foreign direct investment (FDI) and tourism remain weak due to political instability. The report states that growth is set to recover when political stability is restored.

E&Y’s forecast for growth this year is at 2.8% and, with conditions predicted to improve in the second half of 2012, growth is set to accelerate to 3.8% in 2013. While manufacturing in South Africa is picking up, the outlook remains subdued. At the beginning of 2012 domestic demand was weak with retail sales falling 1.2%.

“We expect consumption to grow by 3.1% this year and 4% in 2013. Consumer price inflation remained broadly stable in April, at 6.1%, with food, electricity and petrol prices continuing to apply upward pressure,” states the report. “Looking ahead, unfavourable base effects, the further depreciation of the rand recently and planned electricity price rises will all feed through during the rest of this year. As a result, inflation is expected to average 6.2% in 2012 as a whole.”