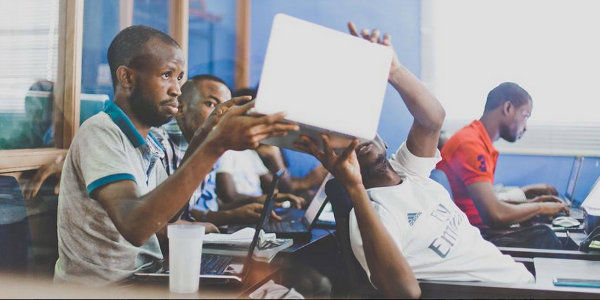 Andela looks for problem-solving skills and logical reasoning among its potential fellows. It claims to have a 1% acceptance rate.

Martin Macharia studied telecommunications and IT, but after graduating took a job in banking because it was the only option available. A few weeks ago he quit the bank to pursue an opportunity to become a “world-class developer”.

Macharia is one of nine Kenyan youths recently recruited by global talent accelerator Andela, which seeks to fill talent gaps in the technology sector. It identifies talented African young people, teaches them how to code, and finds them employment with leading international companies such as Microsoft.

Andela has already trained over 100 software developers in Nigeria. It is currently recruiting in Lagos, Nairobi and New York, and is eyeing more countries across Africa. Over the next decade it plans to train 100,000 world-class software developers.

It is an ambitious goal, but even when accomplished it won’t shake the IT jobs market says, Andela CEO Jeremy Johnson, dismissing talk of a glut of techies.

“There are 1.8 million open technology jobs in the US alone. We won’t put a dent in the gap even when we are successful. Finding not just developers, but genius level developers is challenging to say the least. The skills gap is alive and well.”

Large companies like Microsoft could do in-house training but the process is time-consuming and drains the more skilled workers, hence the opportunity for Andela.

“It is very challenging and takes a lot of time, energy and resources away from the more senior developers. And so by working with Andela you’re able to both find the best and brightest, while evading those challenges,” Johnson explains.

The idea for Andela was sparked during Johnson’s trip to Nairobi last year. The American entrepreneur had been invited to speak about his successful ventures in education. In 2008 he co-founded 2U, now a publicly listed company that partners with top US colleges and universities to deliver online degree programmes.

“During my trip in Kenya I was just blown away by the calibre of talent and human potential that was under-utilised. We decided shortly thereafter it would be worth experimenting with the notion of focusing on skills that were in demand around the world, like software development, but instead of charging tuition you were to pay people to learn. It is a totally crazy idea.”

Andela invests about US$10,000 in salary and training costs per student for six months. The fellows put in at least 1,000 hours of training then begin work as web developers as they continue with training. Besides coding, fellows also learn soft skills such as ethical leadership and how to communicate.

Although in the meantime Macharia will be making 40% less than he did at his banking job, he is upbeat that becoming an Andela fellow is worth the trade-off.

“Give me five years. It may look like a pay-cut, but five years from now I will be way ahead of my peers that I left in the bank. And I will be doing something I actually enjoy. I have a big interest in aviation and the military, and I would like to see what software development looks like in those fields,” says Macharia.

Andela has raised over $10m from more than 10 investors, including Steve Case (co-founder of AOL), US-headquartered fund Spark Capital, and the Omidyar Network.

Although some fellows travel abroad when hired by international companies, most will continue to work from Africa taking advantage of overlapping time zones.

Andela looks for problem-solving skills and logical reasoning among its potential fellows. Its programme has attracted many. When the company announced it was hiring in Kenya it received over 1,200 applications in a period of just three weeks, from IT graduates to people with no previous tech training.

The logistics of training in various countries, structuring recruitment and selecting a handful from a pool of thousands of applicants are challenging. But Johnson describes interacting with Andela fellows as the most exciting part of his job.

“They are some of the most driven, passionate people I have ever met – they would run circles around many of my college friends. They are also thoughtful, humble people who understand their potential impact, and care about being part of this broader mission,” Johnson says.

Ideally, Andela fellows have to work with the organisation for at least four years – although a student could be expelled if need be. After completing the programme fellows should have multiple opportunities from starting their own businesses to working with local start-ups or Fortune 500 companies.

“The reality is they are going to have a lot of options because they are going to be part of this network of the smartest, most driven, tech-savvy young people across the continent – supporting each other through a robust alumni network.”