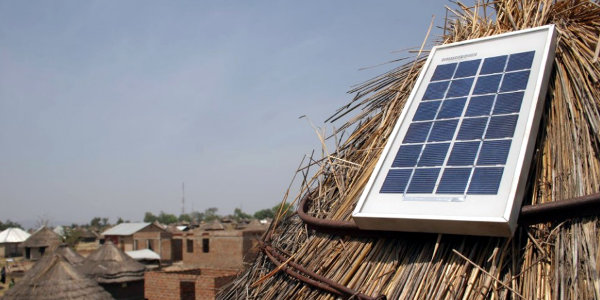 One of the most prominent companies is Kenya’s M-KOPA Solar, which has sold over 300,000 solar kits to users in East Africa. Other players include Azuri Technologies, Mobisol and SolarNow that have collectively deployed more than 100,000 solar systems across the continent.

The key element of the pay-as-you-go solar model is enabling low-income earners in off-grid locations to make small payments towards acquiring solar systems and electrical devices that would ordinarily be out of their reach.

The model’s other appeal is the ease of deployment, says Simon Bransfield-Garth, chief executive of UK-headquartered Azuri Technologies, which operates in 12 African countries.

“What pay-as-you-go does is enable you to get to customers much more quickly than you could ever possibly do [connecting to the grid].”

Bransfield-Garth shared with How we made it in Africa some of the lessons gleaned selling home solar systems to off-grid consumers using the rent-to-own model.

Bransfield-Garth notes that after adopting solar systems there is a “dramatic change in customer behaviour and expectations”. Traders keep their shops open for longer, children spend an additional 90 minutes doing homework and those processing crops work later into the evenings.

“They begin to see the opportunities that they can get from having more solar power and progressively people want more. They want more lights, they want outside lights to keep on the whole night for security [and] they want larger systems.”

But demands are moving beyond lighting. Three years ago, Bransfield-Garth says consumers in rural Africa were excited about getting solar lanterns but today they are asking for additional products like TVs, fans, phones and internet connectivity. However, consumers don’t want to pay for these products upfront, instead preferring to make small payments as they use the gadgets.

2. Reverse innovation from villages to cities

The success of mobile money services, such as Kenya’s M-Pesa, is a classic example of reverse innovation – built in Africa and adopted across the globe. Bransfield-Garth says another kind of reverse innovation is taking place in the continent – that of innovation starting off in rural villages before making its way to urban areas.

“It’s an interesting example of how the technology market is being turned on its head. In rural Africa we are deploying the very latest of solar technology to serve customers needs at a price point that will work for a rural consumer. I get people coming to me in Accra, in Nairobi, in Johannesburg saying they want this in their house in the city because the electricity is not reliable.”

Much of the pay-as-you-go solar power innovations have focused on East Africa, and primarily Kenya. This is partly because of the popularity of mobile money, which solar companies such as M-KOPA, Azuri and Mobisol use to collect payments from customers.

However, Bransfield-Garth says there are many other markets in the continent that can sustain new solar technologies. He cites “some really exciting opportunities” in Ethiopia, Ghana, Nigeria, and Côte d’Ivoire where “there is a very strong demand”.

“The fact that Kenya has become the centre of this is a historical accident rather than anything else. We see this as a technology which should become widespread right across Africa, not just focused in [a few] countries.”

But companies shouldn’t expect to copy-paste solutions from Kenya and the greater East African market.

“What we have discovered is there are significant variations between the different countries,” he explains. “Doing pay-as-you-go in Kenya is relatively straightforward. You have got really well-established mobile money, good climate and good awareness of solar technology. But, if you take a solar home system that is designed to work in Kenya to a place like Ghana, it won’t do well. The reason is that the climate in Ghana is different – you have a long rainy season.”

In Azuri’s case, it has developed smart metering technology that monitors climatic conditions and a customer’s historical usage patterns to regulate brightness and ensure a full night of light, even on cloudy days.

The other challenge is figuring out how to collect payments from users who don’t have mobile money services. In such markets, Azuri offers the option to make payments using a scratch card purchased from local shops.

“We don’t rely on having a particular mobile operator. We have built a system that is designed to deal with the challenges that we face on the ground right across Africa, rather than one that just works in the Kenyan market, which is a frankly a relatively benign market to work from because mobile money penetration is widespread.”

In the early days of adoption, the Azuri CEO notes consumers face hurdles using the solar systems, hence the need to invest in education.

“We have built local representation in the village. I think just running a call centre is not sufficient for customers who are really new to this technology. It is much better to have somebody in the village that customers can go to and ask questions.”