In the coming years agriculture will become one of the world’s most profitable sectors due to rising commodity prices, said legendary investor Jim Rogers in a recent interview with HighQuest Partners CEO Greg Mellinger. 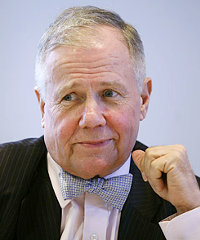 Rogers explained that the price of agricultural commodities “has to go much, much higher or we are not going to have any food at any price”.

In the 1970s Rogers co-founded the Quantum Fund, which invested in numerous investment vehicles, including commodity futures, and experienced superior returns over 10 years, leading to his “retirement” before age 40. He is a regular commentator and columnist in various television and print media dealing with economic and world affairs.

In the interview Rogers noted that farming will once again “be one of the great areas of the world economy” because of higher commodity prices, economies of scale and improved technology.

He said that he currently has significant investments in agriculture and commodities.

“Concerns around the earth’s ability to nourish a population of 6 billion people, expected to rise to 9 billion by 2050, are increasingly abundant. According to the UN’s FAO, food production will have to increase by 70% to feed the globe’s larger, more urbanised, and more affluent population, by 2050,” said Standard Bank analyst Simon Freemantle in a report last year.

“Two recent, and dramatic, global food price hikes have culminated in a substantial reconfiguration of global perceptions around food security. While efforts to control such wild fluctuations are under way (principally in the manner in which data is shared), food, and the means to produce it, is being viewed as the “new oil” of the 21st century,” Freemantle added.

How you can invest in agriculture

Entrepreneurs can also start companies that provide inputs and equipment – such as seed, fertiliser and machinery – to the agricultural sector.

According to Rogers there are also opportunities to open businesses such as restaurants and car dealerships in farming areas. “If you don’t want to go into the fields … open a chain of restaurants in [America’s] Midwest or in the outback of Australia, or get a Lamborghini dealership in Oklahoma or in Nebraska because farmers are going to be driving the Lamborghinis; stock brokers are going to be driving tractors.”

Other options include: providing financing for farmers, investing in stocks of agriculture-related companies, or buying commodity futures.

The best regions for agricultural investment

Which regions hold the best potential for agriculture? Rogers said that the “untouched” countries in Africa, Asia as well as South America are the best places to invest.

He highlighted Angola as a country with cheap land and significant opportunities for agriculture. “[Angola] used to be a huge exporter of food. It is a gigantic country with only 14 million people. They had a horrible civil war for 30 years … they now import food.”

He added that Africa in general has good farming potential. “In some of the African nations you don’t even have to farm, just sit by the side of the road long enough and something will grow. The soil the weather, everything is so great,” Rogers quipped.

Last year in its Africa in 50 Years’ Time report, the African Development Bank (AfDB) predicted that climate change will benefit farming in the northern hemisphere, while having a negative impact on African agriculture. “Rain-fed African agriculture is considerably more climate sensitive than agriculture elsewhere, and soil degradation will have substantially increased due to the population pressure. By 2060, there will be a significant decrease in suitable rain-fed land and in the production potential for cereals,” said the Bank.

According to the AfDB, it is possible that Africa’s overall economic growth could decline by around 3% every year, due to the effect of climate change on farming. The annual fall in economic growth due to lower agricultural output will be about 6% in southern Africa, 4% in north Africa, and 2% in east Africa. Asia will only see a 1.2% decline in growth, while Europe and North America will experience slight gains.