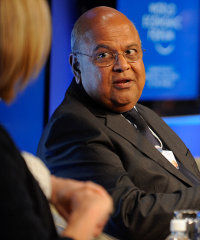 Commenting on news out earlier this week that Brazil’s economy has experienced zero growth in the third quarter, following annual growth of 7.5% in 2010, Gordhan highlighted the negative effect that the global economic turbulence is having on emerging markets. “We thought the ripples from Europe wouldn’t be too damaging, but the results (from Brazil and elsewhere) this week demonstrated the kind of impact that the lack of decisiveness in Europe is having on emerging market economies around the globe, including here,” he noted.

The Committee of Ten (C10), a grouping of African finance ministers and central bank governors, recently also raised concerns about the possible effects of events in the West on Africa. “We reviewed the impact of the recent developments in the United States and European Union on Africa. We highlight that a one percentage point drop in OECD countries’ growth rate will translate into a 10% drop in Africa’s exports and half a percentage point lower GDP growth rate. We urge Europe to undertake decisive measures to address underlying structural problems, and the G20 to bring the global economy back on a sustainable growth trajectory,” read the statement.

Gordhan called for creativity and magnanimity from financial leaders. “We have responsibilities for the global economy as we are now all interconnected.”

“Right now, we require sane voices – voices that project a different vision to what is being projected in the mainstream, and voices that promote a broader set of interests in a society as diverse as our own,” he added.

According to Gordhan, South Africa’s financial system should focus on sustaining the real economy. He noted that the sector has mutated to a point where it serves itself – instead of serving ‘the real world’.