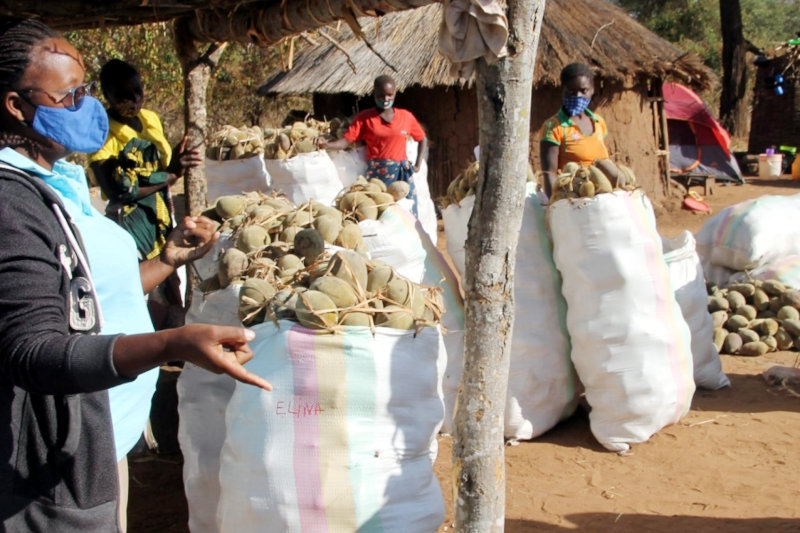 Having lived and worked for many years in Kenya, Milagre Nuvunga and her husband Andrew Kingman returned to their country Mozambique to establish Baobab Products Mozambique (BPM).

The company processes and sells baobab powder and its derivative oil and related products to national and international markets.

Often referred to as Africa’s superfruit, baobab is highly coveted for, among other uses, its mineral properties, especially vitamin C, potassium, and calcium.

The company has so far trained more than 2,500 rural women in the Manica Province, in central Mozambique, on how to collect and supply baobab fruits.

The women collect and store the whole fruits for a period before selling them to BPM. In turn, BPM processes the fruits, extracts high-quality fine powder and cosmetic oil, and exports to the European Union, the United Kingdom and South African markets.

It’s been 14 years of a fruitful partnership between BPM and women baobab collectors.

“Many of us didn’t know much about the baobab value chain,” recalls Suzana Pinto, mother of two and a baobab collector. “We used to sell baobab powder for just 4 meticais ($0.07 cents) per kilo, but now that kilo fetches 12 meticais ($0.19 cents).”

Before the BPM entered the baobab market, informal traders had exploited the lack of knowledge among women collectors like Pinto. The traders bought on the cheap and made a fortune selling at very high prices in foreign markets.

While women baobab collectors are now earning more, BPM is going a step further this year by offering them 20% shares in the company. As a result, the women have organised themselves into a cooperative –  the Baobab Collectors Association.

“This [20% share] allows the women to lead change in their communities, using income from baobab to educate their children, launch other small businesses, and invest in their homes,” explains Kingman.

Pinto says she can now pay for her children’s education, purchase foodstuffs, and install solar energy in her home. She plans to construct a brick house and invest in livestock.

It is difficult to accurately fathom baobab’s sales pathway because of the versatility of the fruit. Many baobab collectors sell the fruits –  in the form of pulp and seed – in the informal market, and buyers then soak the pulp to produce juice.

“In the informal market, it is safe to estimate that the volume traded is double that of the formal market,” which is mostly about powder and oil, says Kingman.

Despite raking in more money from baobab in recent years, natural disasters in the country have affected the business. In 2019, Kingman explains, the coastal city of Beira was “devastated by Cyclone Idai.”

“Another cyclone, Kenneth, followed a few weeks later, causing huge destruction in the north of the country.”

Cyclones also repeatedly ravaged parts of Mozambique in 2021, even as some 1,738 women sold baobab fruits and BPM sold 38 tonnes of the powder in domestic and international markets that year. That figure would have been higher without the cyclones.

“These extreme weather events illustrate Mozambique’s vulnerability to ecological threats,” laments Kingman, maintaining that, “the threats are exacerbated by the very high rate of deforestation the country is witnessing.”

The World Bank notes that since 1970s, the country has lost forests covering up to 8 million hectares, an area nearly the size of Portugal.

In addition, over-cultivating the fields could do long-term damage to the soil and affect baobab productivity. Kingman says that BPM is helping address the issue by “establishing forest reserves where no farming will take place”.

Efficient management of these resources could turn “one of the poorest countries in the world into a middle-income country,” says Kingman.