CEO and managing director of Kenya’s Equity Bank, James Mwangi, was this month awarded the Ernst & Young World Entrepreneur of the Year for 2012. 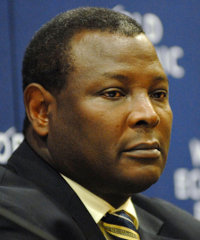 Mwangi was picked from 59 finalists, each of whom had already been awarded the E&Y Entrepreneur of the Year in their home countries.

“This is a global recognition for Africans who are embracing the power of entrepreneurship to change the economic and social state of Africa,” said Mwangi.

With the Chinese finalist owning the largest ship building company in the world and the Canadian finalist from the biggest pharmaceutical firm, How we made it in Africa looks at why Kenya’s Mwangi walked away with the title of entrepreneur of the year.

Equity Bank is renowned for being the bank with the largest customer base in east Africa, and is based in Kenya with regional operations in South Sudan, Uganda, Rwanda and Tanzania. It is home to nearly 8 million accounts, with nearly 50% of all bank accounts in Kenya.

In a conversation with students at Stanford Business School in 2007, Mwangi said that Equity Bank’s strong commitment to its mission statement was significant to its success. “Focus on your vision,” he advised students. “Most of us get distracted and make our core business reacting to competitors. Focus on the customers. Ultimately, the competition is about the customers. It is not about the technology.”

Through strategic capitalisation, Equity Bank also managed to attract the largest capital injection (US$180 million) in the history of eastern and central Africa from Helios EB, an Africa-focused private investment firm.

Mwangi and entrepreneurship in Africa

Ernst & Young are not the only ones to notice Mwangi’s entrepreneurship skills. In 2010, the Financial Times identified Mwangi as one of the top 50 emerging market business leaders.

One of Mwangi’s many achievements is Equity Bank’s investment in an IT platform that can accommodate 35 million accounts, including a level four data centre which is the only one of its kind in sub-Saharan Africa. This means that Equity Bank is at the forefront of creating synergy between banking and mobile telephones. Other innovations include M-Kesho, the world’s first mobile centric bank account; Orange Money, a mobile money transfer platform for Orange Telecom subscribers; and agency banking.

Mwangi hopes that being recognised as the E&Y World Entrepreneur of the Year will inspire young Africans to take up entrepreneurship and show the rest of the world that there are plenty of investment opportunities and potential in Africa. “Having won this award from Africa, I want to tell the international community that Africa is ready for investment,” stated Mwangi. “Africa has the opportunities and is the fastest growing continent and consequently the remaining frontier for those that want to succeed in entrepreneurship.”

“Over the past 26 years, entrepreneurs have done more than any other group to stimulate innovation, job creation and prosperity during both periods of growth and in challenging economic conditions,” said Jim Turley, global chairman and CEO of E&Y. “James epitomises the vision and determination that set entrepreneurs apart and is very worthy of the title Ernst & Young World Entrepreneur of the Year 2012.”