Years of civil war has largely taken Somalia off the map as an investment destination. It also didn’t help that the capital Mogadishu had been branded as the most dangerous city in the world. Perceptions are, however, changing with relative calm in Mogadishu, and Somalis from the diaspora trooping back home to rebuild the nation. 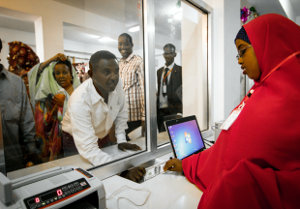 One of them is businessman Liban Abdi Egal, the founder and chairman of First Somali Bank, a new commercial bank, which began operations in Mogadishu in May 2012. He talked to Dinfin Mulupi about the challenges that lie ahead and the emerging opportunities to do business in Somalia.

How did you start First Somali Bank (FSB)?

I lived in the US for 24 years. I went to college there and invested in a few businesses like grocery stores, gas stations, real estate and home improvement. I came back in 2008 and started a few businesses in Kenya as well. One of them is Utech Wireless, which provides wireless broadband internet. My interest shifted to Somalia and I started Data & Resources Solutions (DARS), which does research and data collection and has offices in Mogadishu and Nairobi. We will be opening a new office in Djibouti next month. We have been collecting data in Somalia, and one of the things we realised was the lack of formal financial institutions. This led us to start thinking of opening a bank in Mogadishu. Together with other partners we set up FSB, which opened its doors in May this year. We also run Somali Wireless, the largest broadband provider in Mogadishu.

How much did you invest in the bank as initial capital?

We have put in a lot of money in creating rules and operational procedures, training and hiring staff, installing software and putting up the physical infrastructure. Six of the top level executives are Somalis. We have partnered with investors in the diaspora and Kenya as well as friends and family. We have put in approximately US$2 million.

Describe the response so far?

In the last one month we have opened 200 accounts. We have not given any loans yet because there are a lot of obstacles around banking in Somalia. There are no contract laws and courts to enforce the law. I am glad that [Kenya’s] Equity Bank is planning to go to Somalia as well. I have been telling this story for eight months, but people thought I was crazy. Equity Bank’s announcement proves that other people are now seeing what I have been seeing all along. Somalia has never had a private owned commercial bank. Before the civil war all banks were government owned. In the last twenty years informal money transfers acted as banks. We have to do a lot of teaching about how banks operate and why the country needs it. A lot of people from the diaspora are coming back and they understand these systems. I think we will break even sooner that we earlier thought.

How do you expect business to be in the coming months?

There is no regulatory authority that can give us legal assurances to lend money. Even if we have a lot of capital we have to be selective in lending. We are thinking of doing trade financing – lending to importers of sugar, cement and other commodities. These are basically people that have money and can repay loans. We have a relationship with Kenya’s ABC Bank, which will help us in this.

As a bank we are very conservative at the moment. We take risks but measured risks. We are studying the market. I don’t think things like micro-finance and group lending can work in Somalia. I don’t think 20 people will want to be responsible for one person’s loan. Our focus is not on individuals at the moment but rather on businesses.

What about issues around security, piracy and money laundering?

That is why it is difficult to get corresponding banks. Our Central Bank is not fully functional and we only have a transitional government. When we get an elected government, then institutions like the Central Bank will be able to address these issues. There are things that need to be addressed by the government like giving people identity cards. I hope in six months these things will be addressed.

As a bank we have put in place a lot of checks and balances. When opening an account with us you must have an ID, we will take your biometric fingerprints, we have to visit your business and you need two people who know you. We are trying to show the world that we are following the norms of international banking.

Is Mogadishu safe for investments?

I was just there two weeks ago. We are working hard to change the perception that Somalia is all about war. Business has been going on in the last two years. There is one thing I always tell people and they get surprised, the GDP of Somalia is higher than that of Tanzania, Ethiopia and Rwanda. Somalis are very enterprising. There are opportunities and as things improve there will be even more. [Militant group] al-Shabaab has lost important areas like Mogadishu and it is only a matter of time before they are pushed out completely. Somalia is safe and it will get even better.

Any more FSB branches in the pipeline?

We are rolling out agency banking. We will open the first agency next month. We expect to have five agencies within two months after that. Our plan is to have more agencies not physical branches.