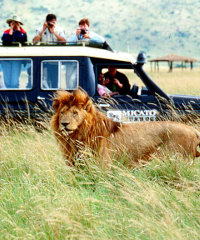 According to Sven Richter, Africa's tourist industry has the potential to be worth around $400 billion.

African tourism is not only about wildlife. There are thousands of kilometres of white, sandy beaches, lakes and rivers and shopping centres. Friendly people wave as tourists cycle the coastal roads of Zanzibar or meet for sundowners each day at the roof top bar at Africa House in Stone Town. Local rangers walk with tourists in the Botswana bush as they track elephant in the Tuli Block, careful not to get too close, while famous people from around the world gather on Cape beaches such as Clifton to sun themselves and show off. Tourism has grown, which does not please everyone — the wine estates of the Cape now charge for the privilege of tasting what are some of the best wines in the world so students are no longer able to get their wine for free!

The tourism industry in Africa also has many constraints: governments protecting their airlines, like Mauritius, despite the local hotel industry lobbying for more flights; governments keen to take a slice of the action with visa fees that are too high; many of the beaches and other potentially valuable tourist sites having too little infrastructure to appeal to the average tourist.

African tourism is only 3% of world tourism and with 20% of the world being Africa, the value of its tourist trade should have the potential to be around $400 billion. The Africa Group has done a study that shows tourism potential in Africa is $250 billion. The current $50 billion market size is thus very small compared to what it could be.

While parts of Africa, such as Morocco, are close to Europe others, such as countries in Sub-Saharan Africa, will always be a long haul for tourists from Europe, America and Asia. Africa must thus produce a good quality product at a price that is attractive.

Distance though is not an insurmountable obstacle as South Africa, the most distant destination, is responsible for around 30% off all Sub-Saharan Africa tourism revenue. The sophisticated infrastructure, varied tourism options, from shopping to natural attractions, and a marketing campaign in key markets, all help the country achieve this.

Tourism has the potential to add significantly to economic activity in Africa and to create many jobs. Many governments are aware of this and providing support to the industry. So the lions we see today are likely to be worth much, much more in the future.