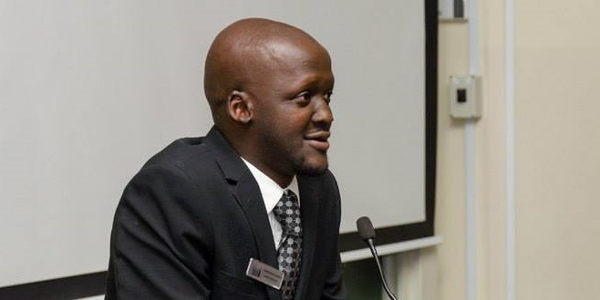 “I have been fortunate and now one of my goals is to be able to go and give back, because I know there is a lot of people where I come from who are skilled in ways that the system does not necessarily cater for,” said Karidas Tshintsholo, co-founder of Push Ismokol Clothing.

Karidas Tshintsholo (20) is a young South African entrepreneur who is defying the odds. With a father who left soon after he was born, he grew up in Ekangala township north-east of Pretoria with a single mother who worked tirelessly to meet his basic needs.

But Tshintsholo’s defining moment came when he was just four – and he will never forget it. It was the first Sunday of the month when an ice-cream truck did its routine visit to his township and, like the other children, Tshintsholo begged his mom to treat him. When she refused, he threw a tantrum.

“My mom then grabbed me very tight and looked me in the eyes and said she couldn’t buy that ice-cream, even though she wanted to. But she told me that I am the man of the house and we needed to work together,” he recalled.

“And that was the day I started thinking like an entrepreneur. I learnt that while my mom could provide food and shelter, if I wanted anything extra, I needed to work for it.”

So he did just that. By age six he had organised a group of children in his community to make wire cars, which he would earn commission from selling to wealthier children. And this was the first of many ventures.

Tshintsholo excelled in school as well. He was involved in a variety of leadership positions and worked hard at improving his knowledge and skills. For example, in Grade 9 he failed a term in maths, but refused to let this keep him from mastering the subject.

“People would say it was something you either could or could not do. But I sat down and did a whole lot of maths, and by the end of Grade 9 I was the top runner in the subject. And it wasn’t because of intelligence or anything like that. It was because I really did just sit down and do a lot of work.”

He ended up winning a scholarship to study Actuarial Science at the University of Cape Town.

A textile company with a social mission

Tshintsholo is also the co-founder of Push Ismokol Clothing, a promising textile company that has earned him a spot as one of 12 finalists in this year’s Anzisha Prize, Africa’s premier award for entrepreneurs aged 15-22.

The company was started in 2011 when he partnered with a friend who had a knack for clothing design.

“He had the design skills, and I had the business mind, so we decided to come together and formally incorporate a company,” explained Tshintsholo.

Four years later, the duo is running a small factory in their community with seven full-time employees – consisting of women and youths. The business designs, manufactures and markets garments – such as t-shirts, caps, trousers and sweaters – under its own brand, which has developed a name for itself locally. In fact, the clothes have been endorsed by a number of well-known South African personalities and showcased on the popular soapie Muvhango.

“To this day we dress one of the show’s actors, and we have started getting national interest in the brand.”

Tshintsholo is adamant about manufacturing his garments locally, as opposed to bringing products in cheaply from China.

“The business is more sustainable in the long run when you grow your own capacity to produce, as opposed to just buying from China and selling,” he explained.

“I also strongly believe in African solutions to African problems.”

One of the aims of his company is to provide incomes and skills to members of the Ekangala community.

“The people who can get out of a township are the people who can either write an essay or solve a maths problem. If you can’t do those things then you are basically trapped because the system doesn’t really cater for those gifted in other ways, such as with their hands,” he continued.

“But I have been fortunate and now one of my goals is to be able to go and give back, because I know there is a lot of people where I come from who are skilled in ways that the system does not necessarily cater for.”

Tshintsholo’s plan for the future is to one day open a pan-African bank so that the continent’s countries no longer have to borrow money from elsewhere in the world and remain ensnared in debt. But, in the meantime, he wants to focus on completing his education and growing production capacity in his textile factory.

His advice to other entrepreneurs is to have patience when it comes to growing their ventures and reaching their dreams.

“And remember, patience and perseverance is what makes most entrepreneurs.”