One of Africa’s most ambitious property developments, Nairobi’s Tatu City, is expected to break ground in the second half of 2011. 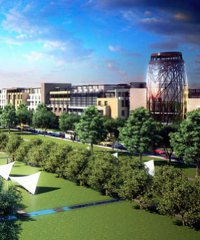 An artist's impression of the Tatu City development.

“Tatu City will be a comprehensively planned, inclusive and open community focused on the work-live-play concept, providing a broad mix of land uses to cater for all the needs of its residents and visitors,” says Josphat Kinyua, vice president of Renaissance Partners and Tatu City director. Renaissance Partners is the principle investment arm of Russian-based Renaissance Group and one of the project’s main backers.

When fully completed, the developers expect Tatu City to be home to up to 80,000 residents, with as many 30,000 day visitors.

Tatu City will have 11 different land uses. Residential will account for 60% of total land use, with the balance to be allocated for a techno park, institutions, commercial retail and hospitality, among others.

The development is capitalising on Kenya’s housing shortage. “There is currently an annual shortage of 30,000 units per year, and a cumulative shortage of 400,000. Tatu City will have a massive positive carry-on effect by enabling mortgage providers to lend to a wider group of the population,” notes Kinyua.

Nairobi itself is also experiencing increasing urbanisation pressure. The government’s Nairobi Metro 2030 Plan encourages the relocation of both commercial and residential developments outside of the CBD. “Like other rapidly developing cities in Africa, the existing pressures within Nairobi and the demands for the growing population in the capital city require long-term and comprehensive solutions,” explains Kinyua.

He said that Tatu City will cater for residents from all walks of life. “Residential neighbourhoods are zoned to accommodate residents and visitors from a broad range of income groups, family sizes and lifestyle requirements through a comprehensive mix of land uses. Tatu City is a full-blown city, not a posh residential area or a huge gated community.”

The first residents and commercial tenants are expected to take occupancy towards the end of 2012.

According to Kinyua, a large percentage of the land will be set aside for natural green belts. “By committing to this, Tatu City will become the first ever sustainable development in East and Central Africa.”

Tatu City will be completed in 10 phases, some of which could be developed simultaneously as demand requires. “Typical of this project type, further funding flow will be required and the timing and magnitude of these flows will be determined on a phase by phase basis. Through the phased development, revenue realised as each stage is released to the market to fund the future stages,” says Kinyua.

Kinyua notes that many investors still view large and long-term projects like Tatu City as risky.

“We have, however, received immense goodwill and overwhelming support from Kenyans for the project. This has strengthened our will and confidence in being able to deliver a first of its kind 21st century urban solution within the timeframe of the project.”