Africa may be the last investment frontier, but the fact remains that its challenges can be as great as its opportunities for business success. 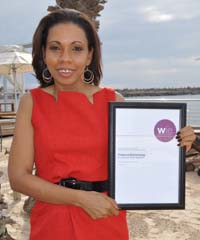 Rebecca Enonchong was selected as one of the 2013 WIE Africa power women in the business and technology category.

Rebecca Enonchong is one tech entrepreneur who learnt that expanding into Africa is not without its sacrifices. She is the founder and CEO of AppsTech, a global provider of enterprise application solutions serving clients in more than 50 countries, and has been taking on the challenges in the African business environment for over 10 years now.

Enonchong established AppsTech in 1999 in the United States in what she describes as an “American dream experience”. The following year she expanded into Canada, France and the UK, but she said she had always had an African expansion plan in mind for her company.

“I grew into what we call a micro-multinational, which is a small business but global. I wanted to leverage that experience and I wanted to be strong enough and big enough to go into the African market,” Enonchong told How we made it in Africa. “And the reason I wanted to wait till I had sufficient financial leverage was because I knew it was a long term investment; that it’s not a once-off; that you can’t come in and hope to make a profit after the first year or whatever. So I really had to be strong enough financially to enter the market.”

In 2001, Enonchong officially entered the continent with the opening of offices in Ghana, and in 2002 she established AppsTech in her home country Cameroon, a decision she said almost destroyed her company. To keep her Cameroonian operations afloat, AppsTech had to close most of their global offices, leaving only two remaining in the US and Cameroon.

“It was devastating to our company because we went from having seven worldwide offices to having two offices, all because of our Cameroon investment,” she added.

As a member of the African diaspora, Enonchong said that she had been excited about expanding their operations in Africa, and particularly in her home country. However, while she knew that success in Africa in the early 2000s would not be an easy affair, she said she was not fully prepared for the obstacles in the Cameroon market. “Even though we anticipated challenges we had underestimated the level of challenges that we would encounter,” she explained.

Facing the challenges of business in Cameroon

Enonchong said that corruption remains one of the main challenges to the business environment in Cameroon. “And the thing that surprised us the most was private sector corruption,” she added. “You see we had planned on public sector corruption, so we really stayed away from a lot of the government or public sector bidding processes but we were really surprised to discover most of the private sector is just as corrupt as government and that was a total shock.”

Another challenge to business growth in Cameroon was the lack of an enabling environment for local companies and entrepreneurship, according to Enonchong.

“And I think when we talk about an enabling environment, we are not just talking about what government does to enable companies or entrepreneurship but also what other companies are doing to enable that entrepreneurship, because really if we were able to be so successful so fast it was because companies supported and believed in us [in the United States]. They invested in us not through financial investment, but by ordering our products and services, and because they did that we were able to grow. And I did not find that same thing in Africa. There’s a very confrontational relationship between supplier and customer, and that was also unexpected because you would think that we both want to succeed.”

However the obstacle that Enonchong said she found particularly disheartening is the fact that Africans do not trust Africans with technology. Speaking at the launch of the inaugural WIE Africa (which stands for Women, Inspiration and Enterprise) symposium in Cape Town earlier this month, Enonchong said that – in her experience – African companies generally tend to have a greater trust in technology that comes from outside the continent.

An example of this happened in Cameroon when a company down the street from the AppsTech offices was looking for specialised software, which Enonchong states that AppsTech had the skills for.

“We had done this before and when we approached them they were like, ‘oh no you guys are too small, we only deal with European companies’ and so they actually refused and wouldn’t even let us bid,” explained Enonchong.

However, a French company that was bidding for the same contract was looking for expertise in the area and they were given AppsTech’s contact details. “So we partnered with this French company and we prepared the proposal – the whole technical proposal we actually prepared – and so they got through the first set and to the second part of the bidding process, and then they had to come and present,” continued Enonchong. “And so they flew in from France to present and they had no clue, so we had to go with them. We went across the street and the same people who told us, ‘no’ were now faced with us.”

Ironically, the French company that AppsTech partnered with won the bid. “And so everything went from Cameroon to France and then back to Cameroon. It just made absolutely no sense, so that’s another example of how corporations don’t enable the local eco-system,” she stated.

Enonchong is also a mentor and advisor to several Africa-based technology start-ups and sits on the board of VC4Africa, an online community dedicated to entrepreneurs and investors building companies in Africa. According to Enonchong, she has noticed some improvements in the Cameroonian and African markets in the past 10 years, mainly surrounding finding talented staff in the technology sector.

“There has also been a change in finding skilled talent, where 10 years ago… we would actually fly people from the US or from France, into the African project and we don’t have to do that anymore,” she said. “That’s a huge difference.”

Despite the challenges, Enonchong still sees an African expansion on the horizon. This year she plans to reopen AppsTech’s Ghana subsidiary, as well as enter Côte d’Ivoire. In addition, the company has further international expansion plans that include Australia.