Nigeria-based W Hospitality Group recently carried out a survey of the international hotel brands’ development activities in Africa. At the beginning of 2012, hotel operators reported a total of 208 hotels, with just over 38,000 rooms, in their development pipelines in Africa. This means signed deals, but not necessarily foundations being laid.

The pipeline has seen a massive increase from last year – 31% more hotels and 21% more rooms.

Historically, north Africa has dominated the development effort, especially in the tourism hot spots of Morocco and Egypt. The Arab Spring has led to delays in many development projects there, and the cancellation of others. The 2.4% increase in pipeline rooms in 2012 is eclipsed by the chains’ advances in sub-Saharan Africa where, after a reduction in 2011, this year sees a massive 42% increase in pipeline rooms.

The top brands by number of hotels and rooms in their pipelines are as follows: 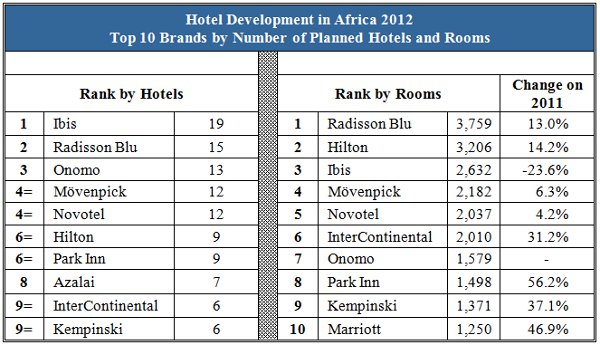 Whilst Ibis (including Ibis Budget) head the game in terms of the number of hotels, Radisson Blu has the most rooms in their pipeline, their latest signing being the rebranding of the 330-room Okoume Palace Hotel in Libreville, Gabon. The average size of a new African Ibis is 140 rooms, whilst the Radisson Blus are 250 rooms. Mövenpick opened in Accra in 2012, and have several hotels and Nile cruisers in their pipeline in Egypt, where they already have a strong presence.

Newcomer Onomo is an interesting entrant to the rankings, coming in at number seven in 2012. Onomo is already operating in Dakar, Senegal and are under construction in Libreville, Gabon and in Abidjan, Cote d’Ivoire. They are developing value-for-money hotels in various locations, with a target of 100 hotels in ten years, focusing on the business market and with a strong emphasis on being environmentally sustainable.

One thing to be noted, however, when looking at signed deals, is that not all those rooms are under construction, and therefore their realisation, especially in many of the very difficult business environments that typify Africa, cannot be certain.

Where is all this activity taking place? Of the total pipeline, 46% are in the five countries of north Africa, and 54% in the 49 countries of sub-Saharan Africa. The table below shows the top ten countries. 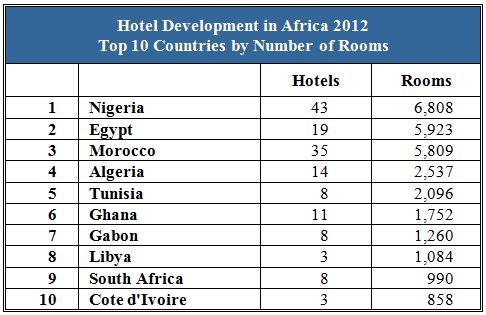 All of the five north African countries feature in the top ten destinations for branded hotel developments – driven either by the well-established tourism industries in the likes of Morocco, Tunisia and Egypt, or by the opening up of the oil-based economies in Algeria and Libya. Over half of Accor’s pipeline is in Morocco and Algeria, underlining their commitment to north Africa. But whilst they have many signed deals, many have listed the opening dates of their planned hotels in north Africa as “not known”, facing delays or, in some cases, cancellation because of the uncertainty in the region.

Historically, the focus of the international chains has been on north Africa, but even before the Arab Spring, they were eyeing sub-Saharan Africa, and the results are beginning to show. Finance for projects in north Africa used to be more easily sourced, with foreign investors perceiving less risk there than in the more volatile sub-Saharan Africa. But times have definitely changed, and countries south of the Sahara are seeing much more activity.

Nigeria, Africa’s largest country by population, the powerhouse of west Africa – and tipped to overtake South Africa this decade as the largest economy on the continent – has almost 7,000 rooms under contract, up 2,000 on last year’s figure, with thousands more in the “nearly” category. New openings recently have included Radisson Blu, Four Points by Sheraton, Ibis and Legacy in Lagos, and many groups have hotels under construction there, including Accor, Hilton, IHG and Protea, the last named increasing their presence in the country from 10 hotels to 16 hotels in the next three years.

Other groups hoping to enter the vast Nigerian market for the first time, and who have signed deals, include Kempinski, Mantis, Marriott and Wyndham.

Two countries new to the top ten are Gabon and Cote d’Ivoire, both emerging nations with massive resources. As well as the Radisson Blu deal in Libreville, Marriott have signed for a new build Marriott hotel with a Marriott Executive Apartments, to be built by the same developer who is building a Marriott in Cotonou, Benin. In Abidjan, Accor is taking over the Hotel Ivoire, a former InterContinental hotel, and will brand it as a Sofitel.

W Hospitality Group says that on average the global hotel brands have less than 2% of their total rooms in sub-Saharan Africa, and with rapid expansion of their existing and upcoming hotels in China, India and other developing and developed countries, this percentage could drop further. But the rewards in Africa are high, and with economic growth rates in many countries of 7% and above, it is regarded by many as the most profitable place to do business – just oftentimes slower than “normal”.