Africa’s beer industry is becoming increasingly competitive with multinational drinks companies such as SABMiller, Diageo and Heineken battling it out for market share. Rapid economic growth also creates the expectation that beer sales on the continent will only go up over the coming years. Nigeria is already the biggest market for Guinness stout after the UK. 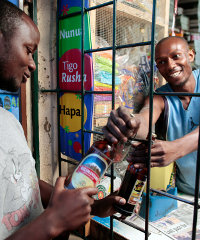 SABMiller has interests in over 35 African countries.

SABMiller, the world’s second largest brewer by volume, is following an interesting strategy in Africa. It wants to drop the price of beer for lower-income consumers, while at the same time attracting more drinkers to its premium green bottle brands. The company’s brewing and beverage operations in Africa cover 15 countries. A further 21 are covered through a strategic alliance with the Castel group and it also has an associated undertaking in Zimbabwe.

A beer for less than two hours of work

SABMiller wants to make beer more affordable to the average African, a strategy it believes will boost sales volumes.

“Beer is very expensive in Africa. We talk about an average of about US$1 a serve, which is anywhere between three and five hours of work for the average African,” said Mark Bowman, managing director for Africa at SABMiller, during a recent presentation in London. “The challenge for us is to try and find what we believe is a sweet spot area of below two hours of work, which will allow strong acceleration of beer growth above the rates that we’ve been used to.”

Bowman said that one element of SABMiller’s affordability strategy is driving down the cost of mainstream beer. “Our philosophy here is quite straightforward and was honed in South Africa as we priced at around 90% of inflation, which over time will obviously drive affordability on an ongoing basis. So if we track our last five years, we believe we’ve done that in local currency terms, and beer is becoming more affordable and that, we think, has driven much of our growth.”

The majority of alcohol consumed in Africa is still in the form of home-brews or illicit liquor. An opportunity therefore lies in luring these consumers into the formal beer market. The idea is that as incomes rise, these consumers will move onto higher priced brands. SABMiller has therefore introduced ‘affordable beer’ as part of its overall product offering. These lower priced brands are made possible by negotiating lower tax rates with governments. The savings are then used to reduce the price of entry-level beers, which draws more consumers into the formal beer market, increasing tax revenues for the government. Buying grains from local farmers also plays an important role in attracting government support.

“What we do is we negotiate with governments to try and persuade them to drop the excise regime for a product that’s made with local grains, which most governments are quite supportive of. The idea here then is to try and create a win-win proposition, where we have a strong group of farmers contracted to producing grains for us of whatever form. The government gets a new source of revenue … And of course we win in that. We’re able to open up this category and potentially bring consumers in earlier into the beer category than they otherwise would,” said Bowman.

In Mozambique, the company last year launched Impala, the world’s first commercial cassava-based beer. Cassava is one of the most widely grown crops in Africa, planted largely by subsistence farmers. Impala is aimed at low-income consumers and priced at around 70% of the price of mainstream beers.

SABMiller’s Chibuku brand is also targeting home-brew users. It is made from locally grown sorghum and maize. Because of its resemblance to home-brews it resonates with these consumers. Chibuku is currently available in over 10 African countries.

Chibuku continues to ferment after it has been packaged due to the presence of yeast in the beer. Chibuku, which is packaged in a 1 litre carton, starts off as 0.5% alcohol by volume (ABV) and reaches 4% ABV after a few days. Due to the short shelf life of Chibuku, not more than five days, Super Chibuku has been developed and comes in a 600 ml plastic bottle with a 21-day shelf life.

At the other end of the spectrum, SABMiller is also pushing its premium products in Africa – a strategy called ‘doubling the price of beer’. Bowman said that 20% of SABMiller’s portfolio in Africa is in the higher priced premium beer category.

“Rapid urbanisation and increase in wealth in cities in Africa is leading to a need for differentiation in terms of the brands that consumers choose,” Bowman explained.

While the premium category does comprise some of SABMiller’s global brands such as Peroni and Grolsch, the brewer has also developed local premium brands in many African countries. An example is Maluti lager in Lesotho – SABMiller’s only local brand in the small nation landlocked by South Africa. “We turned it into something that the people of [Lesotho] can be truly proud of, and given a range of premium cues and took the price up. So, this has worked very, very well, and is the model we have applied in all of our markets.”

Castle Lite, a premium brand originally developed for South Africa, has also been introduced in other African countries as part of SABMiller’s regional premium offering. According to SABMiller, Castle Lite, with its green bottle and foil-wrapped cap has been a “phenomenal success” in countries such as Tanzania.

“If you look the world over, the more middle class societies start to build, the more consumers start to get choice, and they can start to afford choice, and they want to buy brands that differentiate them in the eyes of their peers and in the eyes of other consumers,” said Dave Carruthers, marketing director for SABMiller Africa. “’Double the price’ … is a call to our businesses in Africa to ensure that they are capitalising on the opportunity that is arising in the premium sector.”