Despite Africa’s strong economic growth over the past decade, the continent’s cities still lag behind the rest of the world in terms of competitiveness. 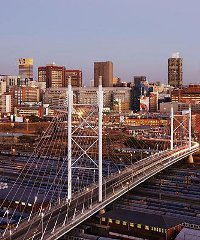 Johannesburg is Africa's most competitive city.

Of the seven African cities included in a new Economist Intelligence Unit (EIU) report that ranks the competitiveness of 120 of the world’s major cities, not one African city made the top half of the index.

The EIU defines a city’s competitiveness as its ability to attract capital, business, talent and visitors.

The report says that African cities such as Lagos and Nairobi are expected to expand rapidly over the coming years. “With … improvement in some other aspects of competitiveness – such as quality of infrastructure and their regulatory environments – these cities could rise up the Index rankings quickly.”

Overall New York (1st) and London (2nd) are ranked as the world’s most competitive cities. The US and western Europe account for 24 of the top 30 cities.

Asia’s economic rise is reflected in the economic competitiveness of its cities. Asian cities dominate the ‘economic strength’ category – which emphasises a city’s overall GDP, growth rate and relative income. Tianjin, Shenzhen and Dalian top the list, while nine other Chinese cities rank in the top 20. “The top 32 Asian cities are all forecast to grow by at least 5% annually between now and 2016. Twelve of them will grow by at least 10%. This is in stark contrast to the low single-digit growth of most developed market cities in Europe and the US,” says the report.

The most important strength of developed world cities is their ability to attract the world’s top talent. “European and American cities dominate the ‘human capital’ category of the Index. This stems primarily from the quality of their educational systems and the entrepreneurial mindset of their citizens. But other factors bolster their performance too, such as cultural activities and a generally good quality of life.”