A little white flower is bringing bright prospects for Rwanda’s economy, and the lives of thousands of small farmers in the process. 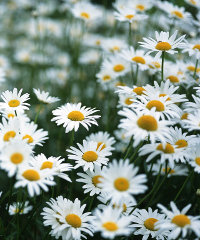 One of just four major countries (Australia, Kenya, and Tanzania being the others) that grow pyrethrum, a flower refined into a highly demanded, natural, flower-based pesticide, Rwanda has been actively working to revive this once near-collapsed industry, and for good reason. With 70% to 80% of the pure active ingredients, Rwanda’s rich volcanic soil has the potential to produce some of the world’s best pyrethrum.

Last year, Rwanda’s pyrethrum flower production increased from 209 to 700 metric tons, while export revenues increased by 380% and global market share surged from 6% to 15%. According to Karisimbi Business Partners, a Kigali-based consulting firm that is working with SOPYRWA, Rwanda’s only pyrethrum refinery, this also significantly contributed to the household incomes of over 8,000 farmers and increased land under pyrethrum cultivation.

Things weren’t always this great. “At the time the current owners stepped in to take over, [SOPYRWA] was on the brink of bankruptcy,” reports Karisimbi, the result of “historical issues and challenges: international customer relations had deteriorated; erosion of regional production market share; financial challenges led to strained relations and broken trust with critical farmer communities, etc.”

The pyrethrum plant, introduced to Rwanda by Europeans in 1936, is a safe, natural pesticide alternative to harmful synthetic chemical pesticides currently used to control a wide range of insects. In 1963, the Rwandan government took interest in expanding the pyrethrum industry, and granted two hectares of land to each individual farmer in a belt around the Parc National Des Volcans (Volcanos National Park) in northwestern Rwanda. Farmers were contracted to dedicate 40% of their land to cultivating pyrethrum, and the remaining 60% could be used at their own discretion.

In the 1970s, the government merged a “planters association”, which was comprised of the pyrethrum cultivating farmers, with an industrial facility that could process the flowers for export as raw, pyrethrum extract, into a company called OPYRWA. Unfortunately, at the same time the global pyrethrum market suffered a downturn.

The rise of low-cost synthetic pesticides (Pyrethroids) in the 80s and 90s, their harmful effects not yet entirely known, turned the market’s attention away from pyrethrum. The export of organic pyrethrum from Rwanda began to plummet. In an effort to add value to the product locally, OPYRWA began building a refinery to further process the raw pyrethrum extract into pure pyrethrene, which could be added to pesticide formulas without any further processing. This, they hoped, would drastically reduce the transportation costs of the operation, which given Rwanda’s landlocked location, are significant.

When the 1994 Rwandan genocide occurred, it caused the entire industry and infrastructure to collapse. Farmers fled their lands, the factory was abandoned, and the new refinery was left unfinished while the country descended into chaos. The northwestern region, where OPYRWA was located, was especially hard hit, with refugees fleeing to the Congo, and the military mostly overtaking the area in their absence.

From 1994 to 2001, the northwest region of Rwanda was an area of instability and conflict. It wasn’t until 2001 that the government, focused on providing security and making a push towards privatisation of industries as an engine for economic growth, decided to promote a resurgence of pyrethrum production by privatizing OPYRWA, renamed SOPYRWA.

Ten years on, the global pyrethrum market has picked back up. “As one of only three refineries in the EAC region, SOPYRWA is now strategically positioned to play a major role in the global market,” says Carter Crockett of Karisimbi Business Partners. In early 2011, Gabriel Bizimungu, general manager of SOPYRWA, said in an interview that the exports were valued at about US$1.63 million. “Rwandan pyrethrum is selling high compared to the same products in the region because of its good quality and modern processing,” Bizimungu said.

A decade ago, Kenya dominated the production of pyrethrum, raking in about 70% of the global trade. Yet over the past six years, mishandling, corruption and delayed payments to farmers has caused a massive drop in Kenyan production. Industry experts claim that Kenya can still make nearly $135 million annually, but only if they renew their focus as well.

SOPYRWA is now focusing on re-building the 15,000+ network of small farmers and their families who are key to their supply chain. By re-engaging private cooperatives, which deal directly with the local farmers and serve as collection points for dried pyrethrum, and offering farmers higher prices, immediate payment, and stronger high-yield seeds, SOPYRWA hopes to bring Rwanda’s share of the global pyrethrum market up to 20%. At the same time, SOPYRWA is now developing additional value-added products for the local region through a venture with a UK-based industry partner.

With government backing, and an expansion of global partnerships, SOPYRWA appears poised for another big year. Yet Crockett adds that the growth has as much to do with what SOPYRWA and the Government of Rwanda has done, as with the global market demand itself. Demand still outpaces supply by about 4:1, and the trend towards organic (e.g. anti-synthetic pesticides) coupled with Kenya’s collapsed pyrethrum sector puts Rwanda at a distinct advantage.

Given the ideal climate, both in terms of Rwanda’s improving business environment and its actual soil conditions, the potential for Rwanda’s pyrethrum production and refinement is vast.