Twenty-eleven has been an exceptional 12 months for How we made it in Africa.

Before I ramble on about our achievements for the year – just a note on our publishing schedule for the holiday period. Although the website will be updated regularly, we will give our daily email subscribers a break from 21 December 2011 to 8 January 2012, after which the service will continue as usual.

Highlights of the year:

The undisputed highlight of the year was How we made it in Africa’s selection as one of the three finalists (together with Reuters and The Africa Report) in the Media of the Year category of the Diageo Africa Business Reporting Awards. 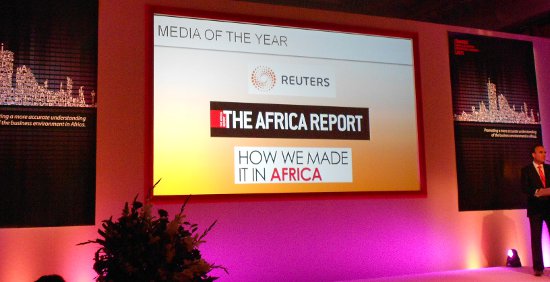 Unfortunately Reuters snatched the top honours at the ceremony that took place at London’s Landmark Hotel in June. However, considering that How we made it in Africa had been in existence for barely 12 months at the time of the awards, we don’t feel too bad about losing out to a 150-year-old news organisation such as Reuters. We hope to be back for next year’s awards.

Readership increased significantly over the year. This past month we recorded our highest ever monthly traffic figures with over 100,000 page views coming from more than 50,000 visitors. It is our aim to double our readership in 2012.

Although global economic uncertainty had an impact on advertising revenues, sales for the year were still strong with a number of high profile companies – including Siemens, Standard Bank, Imperial Logistics, Bowman Gilfillan, etc – promoting their activities to How we made it in Africa readers. Advance bookings for 2012 are also encouraging.

How we made it in Africa recently became a member of South Africa’s Digital Media and Marketing Association (DMMA). Although we are focused on the entire continent, a big chunk of our advertising revenue comes from South African companies; therefore it makes sense to be part of the DMMA.

Our agribusiness-focused email newsletter, Agri4Africa, produced in association with South Africa’s Agribusiness Development Corporation, grew from strength to strength. One reader recently had the following to say about the newsletter:

“I am very impressed by your high level of professionalism & modernism. Agri4Africa is the agribusiness vanguard of Africa, as far as I am concerned.”

Twenty-twelve is set to be an interesting and exciting year, both for the continent and How we made it in Africa. Something to look forward to is the World Economic Forum on Africa in May 2012, which is moving from Cape Town to Addis Ababa. The fact that the event is held in Ethiopia is testament to how countries that were previously associated with poverty and famine are now establishing themselves as business destinations.

How we made it in Africa will also launch a number of new initiatives in the new year, most notably our first conference as well as an improved Jobs section.

In conclusion I would like to thank all our readers, advertisers, journalists and staff for their support during the year.