When Indian-born entrepreneur Manoj Shanker relocated to Tanzania 16 years ago he was just a “sales and marketing guy” as he puts it. But in less than two decades he transformed a small IT training institution offering basic computer literacy courses, into a multinational with a presence in 23 countries globally and 1,600 employees. 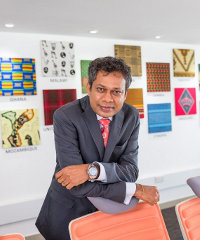 Shanker is the CEO of Techno Brain Group that builds software solutions for governments, NGOs and private companies. Its product portfolio includes training, IT software solutions and business process outsourcing (BPO) services. Techno Brain was recently named one of the 50 fastest-growing technology companies in Africa by professional services firm Deloitte. The company is currently based in Nairobi, Kenya.

Shanker too has received many accolades including the 2014 East Africa Entrepreneur of the Year award at CNBC Africa’s Annual Business Leaders Awards (AABLA).

After graduating in science, Shanker stumbled into technology after seeing a poster in Bangalore that predicted millions of IT jobs would be created in the 21st century.

True to that prediction, the industry commands trillions of dollars and has created numerous jobs. In Africa the last decade has been transformative with hundreds of millions of people acquiring mobile phones which enable them to access the internet and transfer money. The opportunities have also attracted many young people aspiring to work for multinationals or become wealthy entrepreneurs.

Shanker says it is encouraging to see ambitious young people going into the industry, but warns they should expect some downsides.

“Technology jobs bring a lot of money but it also comes with a hell of a lot of stress. People in the technology sector age faster; they sit in front of the computer and work for long hours and they have lots of pressure from the market to deliver, as well as from shareholders.”

Shanker jokes about his slightly greying head as he talks about managing a team of 1,600 employees on four continents. To cope with pressures he advises entrepreneurs and CEOs in the fast-changing industry to strike a balance in life.

“Sometimes it becomes difficult. I will not say I crumble, but sometimes I get nervous and feel frustrated. One of the things which really helps me is having a hobby. I have developed a hobby in bird photography. It is the best way I can unwind myself. I also like to spend time with family.”

One of the reasons behind the success of Shanker and Techno Brain is the realisation of opportunities that Tanzania and Africa presented. When Techno Brain was started there were few IT companies in Tanzania and most jobs were contracted to foreign companies which charged hefty prices.

Shanker adds that having a “big vision” that involved more than just making money has also guided the company’s growth and success.

“Our goal has always been to build an African company with a very strong foundation that will stand for many years to come.”

Shanker attributes this approach to the company’s chairman Mahesh Patel whom he describes as ambitious, and visionary. “He always encouraged us to think big and dream big.”

Nonetheless, Shanker says there were times he should have cast his nets wider. “On a couple of occasions I have felt I could have taken bigger risks. I have been very conservative sometimes. But anyway, those are the lessons you pick up along the journey.”

He advises entrepreneurs to be visionary, adhere to high-quality standards, be resilient and be “ready to experience bumps”. One should not expect to strike it rich overnight, he warns.

And when and if they eventually make money, they should try not to be distracted by it.