So how has Nigeria’s biggest and most profitable bank transformed into a social media leader? The bank initially became interested in social media in 2009, when it recognised that a fan page had sprung up on Facebook. It knew that surrendering part of its brand to outsiders – some of whom may not even be customers – could be harmful to its reputation. 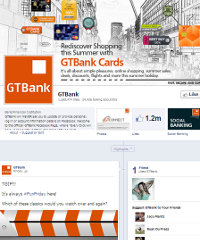 In the beginning, the bank focused its social media strategy on customer service and engagement. Even today, the bank sees social media as an opportunity to ask itself a simple question: what do customers – and prospects – really want from their bank? The results have helped the bank define strategy and make decisions such as where to place new ATMs, the roll-out of e-branches and even the placement of a full-service branch.

In a country where communicating important messages to a wide audience is often difficult, social media has also helped the bank identify and communicate enhancements and problems with its products and services. In 2012, when part of the bank’s internet functionality was down (due to security system upgrades) customers flooded social media with questions and comments. In short order, the social media team was able to monitor the issue, alert executives to the problem and then work with stakeholders across the organisation to communicate the issue – and proposed resolution – to customers.

Recognising the unique needs and demographics of their customers, GTBank’s executives encouraged the bank to go further in leveraging social media to identify ways to make banking easier and more accessible for current and potential customers.

In this, GTBank ranks among just a handful of banks around the world that plan to offer this feature; not surprisingly, most are in the developing world (such as India’s ICICI and Brazil’s Bradesco) where traditional bank account opening processes are often considered cumbersome or inaccessible.

GTBank also sees social media as a unique opportunity to interact with customers and prospects while strengthening their brand in key markets. The bank recently re-invented their quarterly digital magazine (called Ndani which means ‘inside’ in Swahili) as a major social media presence replete with Ndani.TV, the Ndani blog and Ndani Facebook pages.

With an eye towards further expansion into Africa (GTBank already operates in five other African countries), the bank also ensured that Ndani would promote not just the bank, but the entire continent. Recent features have spotlighted many of Africa’s success stories: Kenya’s version of Silicon Valley, Nigeria’s “Nollywood” film industry, fashion designers, entrepreneurs and musical artists.

While the platform may still be nascent, GTBank aims to deliver content that appeals to as wide an audience as possible. Just recently, Ndani featured live video streaming of the 2013 Lagos International Polo tournament (an event that largely appeals to an older and more affluent customer segment).

Banks in the mature markets and the West should take note: in early 2013, GTBank cracked the one million fan mark, making it Africa’s most-‘liked’ bank. And it enjoys more ‘thumbs-up’ than almost any of the largest North American and European banking brands online today.

With GTBank’s success growing by the day, we believe that – in the not-too-distant-future – Western banks will be looking to Africa for best practices in social media, not the other way around.