“So this is Lusaka’s industrial centre,” said Shepard Chisonga as we juddered across a railway, leaving behind the city’s humming streets of people and informal traders. The scenery changed from compacted buildings and busy roads to spacious factories surrounded by large trucks and delivery vans. 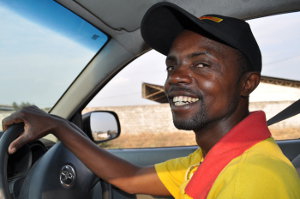 Shepard Chisonga showed How we made it in Africa around Lusaka’s Heavy Industrial Area.

Chisonga has been a courier for DHL for the past six years and I was joining him on a warm Wednesday afternoon as he delivered packages in and around the expanding Heavy Industrial Area, north-west of Lusaka’s city centre. The area is heavily populated with DHL customers and as we passed large factories, I spotted many familiar brands: Parmalat, Bata, Barloworld Equipment, Pepsi, Zambian Breweries, Nestlé, Zambeef, Total and Puma Energy, to name a few.

As we visited some DHL customers located in the Heavy Industrial Area, I learnt a bit about Zambia’s business environment and the areas where local and international companies see potential for growth.

Zambia has an opportunity to be an export hub

Zambia is a landlocked country, and much of its imported items have to succumb to price increases due to duties and long-haul transport costs. According to Sufyaan Munshi of Chicco Quality Biscuits, which manufactures a number of confectionery and biscuit brands in Lusaka, the profitability of manufacturing locally is heavily affected when raw materials have to be imported.

Like a number of other companies in the Heavy Industrial Area, Chicco sees potential in using Zambia as a base to supply its products to neighbouring countries, and already exports to Malawi, Zimbabwe, and the DRC.

Not far from Chicco is the Pepsi production line, which also uses its Lusaka location to export to Zimbabwe and Mozambique.

Like many other countries in Africa, Zambia is seeing an emerging middle class, and consumer-facing companies are expanding in the market to meet the growing demand for higher quality products and upmarket shopping experiences. South African companies have been particularly active in the country, with the big grocery retailers such as Shoprite and Pick n Pay anchoring major shopping malls in Lusaka.

However, Zambia’s larger lower-income consumer group also offers opportunities. Radian Stores, a Zambian retailer of electronics and home appliances, and Zambeef, the country’s leading agribusiness and meat producer, have different products and retail models to cater for both the growing middle class and those with lower incomes.

Zambian Breweries, a subsidiary of SABMiller, has a strong market share in Zambia, and is one of DHL’s customers. The company brews local brands, Mosi and Rhino, as well as Eagle which is produced using only locally-sourced raw materials. Mosi is a favourite among many beer-drinkers and can be found in most hotels, bars, restaurants, and liquor stores. Chibuku, which is brewed using either maize or sorghum, is mostly popular amongst lower-income groups due to its affordability.

Catering for the Copperbelt

The growing consumer market is not the only growth sector for companies based in Lusaka’s Heavy Industrial Area. Zambia is blessed with an abundance of mineral resources, particularly copper-cobalt, and the mining industry attracts significant commercial activity and foreign investment.

While there is much room for growth and development in Zambia’s local manufacturing sector, the country has many of the ingredients that make up an investor-friendly environment. It has a growing consumer class with rising disposable incomes; attractive tourism destinations such as world-class game parks and the Victoria Falls; a wealth of mineral resources that drive the economy; and a reputation for political stability and a peaceful environment.