Norwegian-based global fertiliser company Yara International has announced a US$20 million investment into a new fertiliser terminal at the port in Dar es Salaam, Tanzania. 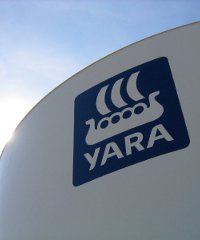 Yara says in a statement that investing in increased port capacity positions the company for the growth to come. This is a strategic step for Yara, while at the same time it is an investment at a vital point in the value chain, adding capacity to the port facilities and preparing for increasing fertiliser volumes as productivity in the agricultural sector picks up.

“Through our strategic partnerships, including the one with the Tanzanian Government, we have gained a strong belief in the positive prospects of agricultural production. In the years to come the agricultural sector has the potential to be a key driver of economic growth, providing business opportunities. Tanzania stands out as a natural hub for regional growth,” explains Haslestad.

Yara has been a partner in the Tanzania Agriculture Partnership since 2006 and was also instrumental to the process leading to the Southern Agricultural Growth Corridor of Tanzania (SAGCOT).

“In Yara, we are proud to present this early stage anchor investment into the SAGCOT agricultural growth corridor,” says Haslestad.

“The SAGCOT is driven by a unique partnership of public, private and donor companies and organisations. The initiative raises a promise of sustainable growth, aiming at reducing rural poverty both through providing opportunities for smallholder farmers and creating new jobs. This encompasses both increased levels of food security and viable business opportunities,” says Haslestad.

In the recently released ‘Blueprint for Investment’, the SAGCOT outlines how a shared value creation approach can be used to tackle some of the key constraints to development. The result, over a 20 year period, would be over 350,000 hectares under commercial production, much of it farmed by emergent and smallholder farmers. Adding to the agricultural production in the region will ensure food security for Tanzania and the wider region, lifting 2 million people out of poverty, and bring in annual revenues of an estimated $1.4 billion.